home/articles/ Reach for the LasersHypermedium In Focus

Reach for the LasersHypermedium In Focus

It’s rare for a label to make such a strong impression in so short a time frame as Athenian outfit Hypermedium, especially considering that they have had just three releases to date. The imprint was founded in 2015 by Akis Sinos and Timos Alexandropoulous, after the pair met at a festival they were both working on at the time.

After discovering they had common musical and artistic interests, they started to collaborate, working on gigs and playing together. When asked about the label’s founding, they elaborate on how the project developed: “A couple of years ago we started having more concrete ideas about the music we would like to release, focusing on contemporary electronic music; whether this be computer music, noise collages, more club-oriented sounds or excursions into futurism. At that point, Roc [Jiménez de Cisneros] and Steve [Sharp] from EVOL were kind enough to give us some of their new material. We were more than happy to make a 12” out of it, so this became HMDM001, ‘Melting Pinkness’. This is how Hypermedium came into being.”

Those familiar with EVOL will know the pair chart some rather unconventional territory, defining their sound as “computer music for hooligans”. Their release for Hypermedium pushed this mission statement to the limit; a demonic amalgamation of vocodered wails and amphetamine charged acid-riffs combining like a SEGA Mega Drive console gone haywire.

Earlier this year I was lucky enough to catch Hypermedium’s showcase at FASMA festival; subjecting myself to EVOL’s bizarre square wave symphonies first hand. In a concrete bunker filled thick with smoke, EVOL’s work soundtracked crazed technicolour lasers, painting mottled plates of bright pink, green and blue through the fog. “I think for a lot of people it must have been a shock, coming down to that dark, smoke-covered basement while EVOL were playing”, Akis and Timos reflect when asked about the occasion. “A night to remember for a few people we know. We met EVOL five years ago when we invited them for a live set here. Back then Hypermedium didn’t exist, but we became friends with them over the years.”

Since their founding, Hypermedium have gained interest internationally, yet the duo highlight how running a label in the Greek capital is no simple undertaking. “To an outsider it may seem like Athens is bursting with energy but to be honest, we’d say things still get done on a quite superficial level”, they begin on the topic. “As far as certain issues are concerned, things are even worse than they used to be. A lot of record stores and spaces that were important points of reference for the Athenian crowd have closed down and budgets are continuously shrinking. Most people are working on an extremely tight budget, so most of the times it seems impossible to organise something bigger and to invite people from abroad. Lack of substantial funding, support or plain interest means that pretty much everything is still running on a more-or-less DIY basis. Having a steady spot to be able to work and build a crowd or a following on a long term basis is quite rare. On the other hand there’s certainly much better music coming out of the city lately, with a lot of people and crews making great stuff and demonstrating much higher competence than ever before.”

Going on to discuss the trials and tribulations of running a label more generally, the pair are equally candid about the difficulties. “I think most people would agree that starting a vinyl label is a great challenge in its own right, to begin with. It’s really hard to sustain financially; even harder when you run a label that is based on the periphery of the main centres of activity; like London, Berlin, etc. On top of that you could add the enormous cost of running and maintaining a proper business in Greece nowadays – whether it’s a label, a shop or any sort of enterprise. This might give you the whole picture.” 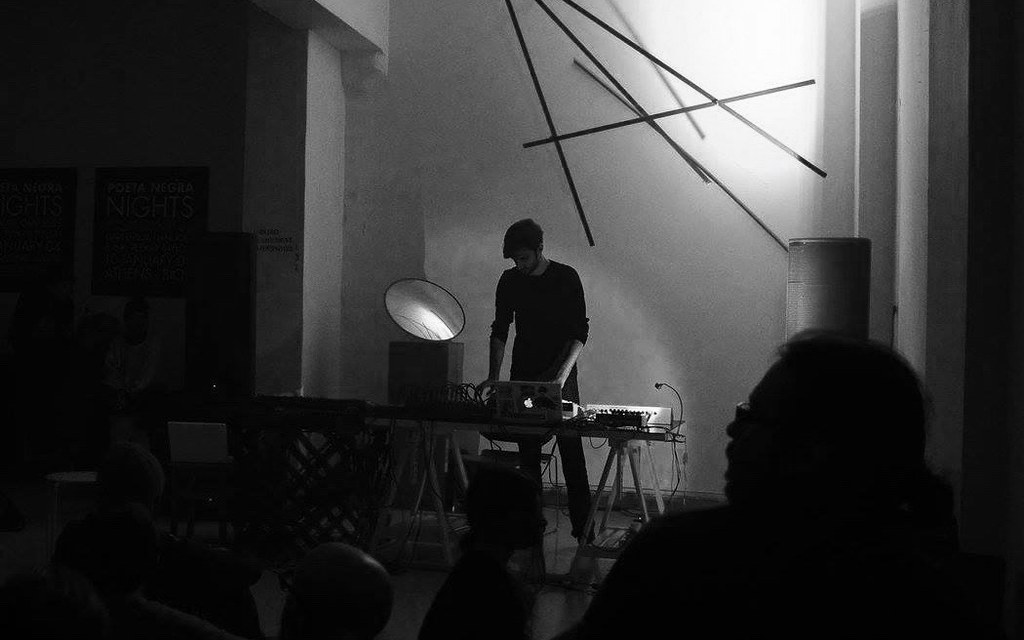 Despite their unflinching realism about the hardships of running Hypermedium, the pair not only manage to sustain the label but also find time to work on their own projects too. The second release in their catalogue came in the form of a split release from Patiño and No God Ritual; a moniker of Timos’. His contribution to the release is reminiscent of Gábor Lázár’s collaborations with Mark Fell, pitting frenetic additive synth modulations against razor-edged drum-machine patterns and vaporous expulsions of low-end. Recently, he also played alongside Actress under his Xyn Cabal moniker in Manchester.

Akis and Timos’ musical interests haven’t always been electronic-focused however. They were both into punk and metal in their younger years, getting into experimental music later as they began to mix with like-minded people. “As time went by we became more and more involved with different aspects of club culture” they explain. “Arriving there from a totally different background was quite refreshing and it opened up a whole new set of possibilities that really refined the way we engaged with music, both as listeners and musicians.”

The pair are keen to stress that it would be difficult to cite any specific examples of projects that have influenced the label, as Hypermedium is the result of years of listening and thinking about music. The imprint is inspired by a complex web of cross-pollination, which appears to still be going on. Most recently, they released ‘The Rise of Gqom’, by South African gqom collective AudioBoyz. “The whole gqom wave came as a blast for us” they assert when asked about how the release came together. “We were big fans of their first record on Blank Mind, regularly playing their tracks in our sets. When we were discussing what’s next for Hypermedium it made total sense for us to include a record with them. We managed to find their contact details and after some discussion they were totally into the idea. The whole procedure was more than smooth and we’re totally happy with the record. They’re working really hard on their music so we’re confident that there’s a lot more to come from them in the future.” In terms of the label’s next movements, there are upcoming releases from Mexican artist Siete Catorce and Gang of Ducks signee Dave Saved already confirmed. “Siete’s ‘Paisajes’ EP on Enchufada had been stuck in our heads for a long time” they reveal when asked on how the releases come together. “We further explored his music and short online exchanges led to the collaboration. After that there’s a split release coming up between Dave Saved and NPLGNN. They first appeared together on the Eternal Flame cassette last year on their Forever Now imprint and we immediately got hooked. We asked them if they would be interested in further investigating the concept they initially started with their cassette, as we feel that this is something closely related to our ideas. We’re expecting this to come to fruition in mid-2018.

“That said, we feel that it’s important to emphasise that although we always get in touch with artists we admire to discuss a prospective collaboration, we give them total freedom to work on their music and vision. Just because we enjoyed their previous work doesn’t mean we expect something similar to that.”

Visit Hypermedium’s website to stay up to date with their next movements.