Short run vinyl is a tricky business. In our own endeavours, we’ve often been advised pressings of less than 200 is a pointless excursion, financially speaking. One workaround is lathe cutting. In this process, each individual disc is cut separately, rather than cutting a master plate, which all the other records are pressed from. New York founded ICM, or ‘In Context Music’ learnt this lesson early on, limiting their releases to lathe cut series numbering just 25 from the very first release, as label owner Angus Tarnawsky explains.

“I first encountered lathe cutting through the work of Peter King” he begins. “I immediately liked that by default, lathe cuts are produced on transparent discs. At first, cutting on lathes seemed like a smart financial decision but I soon realised that compared to vinyl, it isn’t necessarily that much cheaper.”

The main draw for releasing lathes for Tarnawsky was the aesthetic, but as well as the thick, clear plastic they are cut on, the method of production makes for an interesting differentiator. As Tarnawsky puts it, “it’s a great way to attract attention to challenging artistic content.” 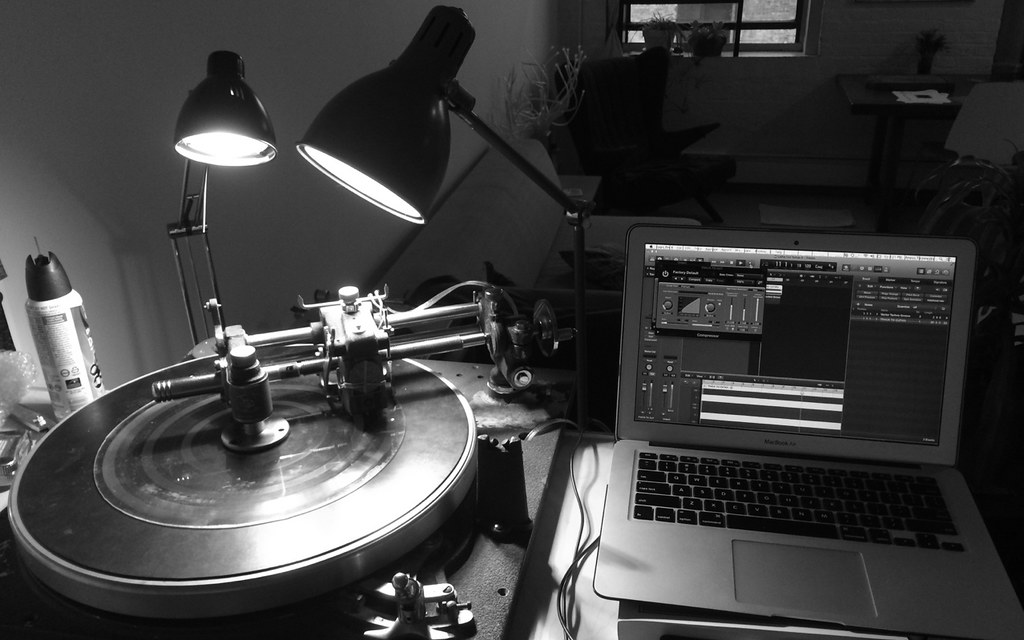 Founded by the Australian-born artist in 2013, ICM was set up shortly after his relocation to Brooklyn NYC. He made the move after receiving a scholarship from the University of Melbourne for his research into hybrid instrument design, as well as being offered the opportunity to play with Apache Beat. “It was a fantastic experience and something that has profoundly changed my outlook on music” he says of the experience. “It really set the tone for everything that I’ve done ever since.”

“I remember arriving in the city during the middle of a snow storm and almost immediately, heading out to a punk show. Every week, I rode my bike to Gowanus where Apache Beat would rehearse in a basement studio that used to be owned by Brian Eno.”

“For the first couple of years, I was absorbing so many new things every single day and saying yes to every opportunity. To go from a point of geographic isolation to being at the center of the world is a big change. Of course, you sometimes need to take a break from that kind of situation to gain perspective on what is most important for your practice.”

Sonically, ICM focuses on electro-acoustic oddities of all manner; from the plaintive harp manipulations of Shelley Burgon, to the dry, uncooperative percussive excursions of Parisian artist, monotope. There’s also been lo-fi amp experiments from Che Chen, sounding like the off-cuts of a Dirty Beaches record, as well as a trilogy of 7”s from the man behind Driphouse, Daren Ho, showcasing a series of oddball modular reductions.

“I just follow my own instincts and trust my taste” Tarnawsky replies when asked about the curation of label’s sound. “I like the idea of something new – not necessarily the first time that something has ever happened, but the first time that the featured artist has touched upon a concept within their own work. Given that angle, it makes sense that style, as a whole, is less important for ICM than for some other labels.” 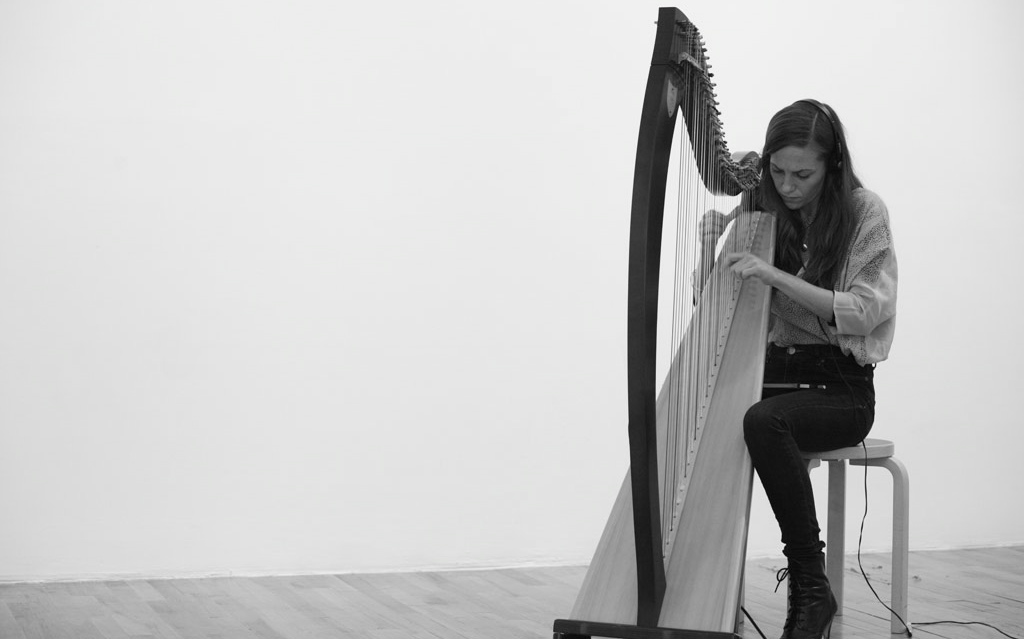 Talking in more detail about the label’s founding, Tarnawsky is keen to stress the importance of his collaborators. “I wanted to create an outlet to unify several different layers of my own creative practice” he begins. “Something that as a whole would be greater than the sum of the individual parts. After working through many different ideas, it dawned on me that forging a curatorial relationship with other artists and starting a label would yield something really special for everyone involved.”

“Every release on ICM is personal. There’s no one involved that I haven’t met and for the most part, I’d like to keep it that way. monotope (from Paris) was a special release as I found his work online, released it not knowing him but eventually, we had the chance to meet and play some shows together in London and Berlin.” 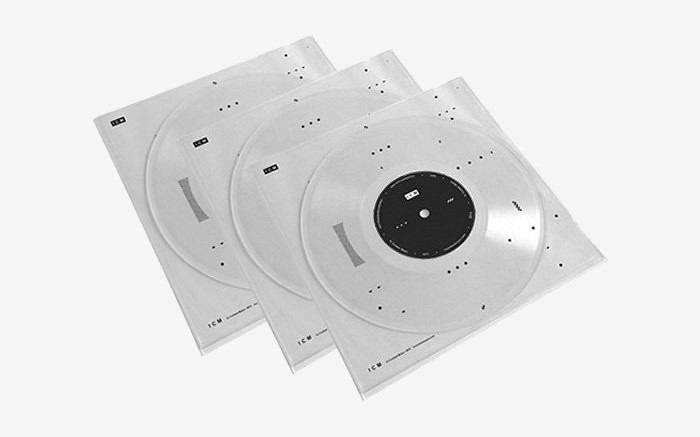 The labels aesthetic, is another area in which Tarnawsky seeks to involve outside influence. “That was something worked out alongside a good friend, Jordan Dolheguy at Totem Visual” he says of ICM’s artwork. “We’ve known each other for a long time and when starting out, I’d got to the point of designing the logo and the art for the first release but was feeling frustrated with getting the feel right for a poster promoting a series of launch events. I emailed Jordan asking him to look over what I had and he was really generous and was not only able to refine the poster concept, but helped establish the core visual language that has been evolving ever since.”

Despite the involvement of contributing artists however, ICM is still very much bound to Tarnawsky’s own availability and resources. In his own words, that explains why ICM “fluctuates from very busy to very quiet.” ICM’s activities had to be put on hiatus for a year or so most recently. Alongside the practicalities of his relocation to Canada, Tarnawsky is also involved in a wide-range of other projects, making it impossible to pursue everything at the same time.

As far as the future goes though, Tarnawsky is open to the possibility of an expansion. “In the future, it’d be great to assemble more of a team to help with daily operations” he suggests. “I really love all of the artists I work with and it’s fantastic that they are always on the same page as me. I appreciate and thank them for everything that they bring to ICM.”

Speaking of his other projects, our first exposure to Tarnawsky’s work was not through ICM, his work as a session drummer or research based projects, but his solo EP for Tom Dicicco and AnD’s Inner Surface Music. Entitled ‘Pitched’, the 12” covered four disjointed percussive abstractions, part hollowed out 2-step, part Autechre-like experimentalism. Pressed on his relationship with Inner Surface, Tarnawsky speaks of their continued interest in his work. “Initially, I met Andrew [Bowen] by pure chance when I was on tour in the UK” he explains. 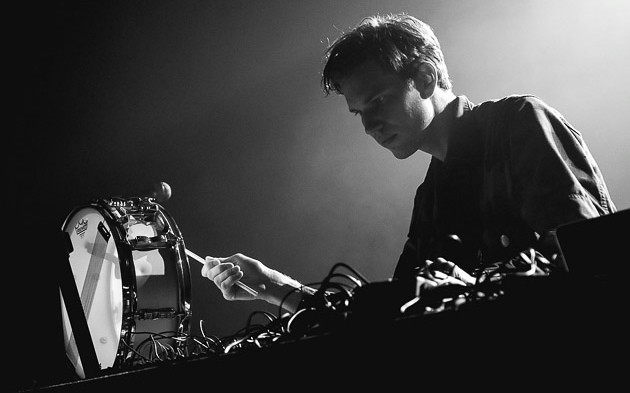 “We stayed in touch over the course of a year before putting things together for the Pitched EP. We’re still in frequent contact and I’m really excited about presenting another full-length release of my work in the not too distant future. Tom and I have spoken a bit over the past few months as well about some US touring together as he’s never played out here. In general, given that we all live in different places, I’ve been lucky to play shows and hang out quite a bit with all the guys including one really special show in 2014 where we all shared the bill at Soup Kitchen in Manchester.”

As well as another Inner Surface release on the horizon, and following an interim at the Red Bull Music Academy in Montreal, Tarnawsky is planning a return to New York sometime next year. “It will be great to reconnect with the city and continue to build on my work there” he says of the return to NYC. “ICM will resume normal activities around that same time and I am very excited that some backlogged releases will finally see the light of day alongside a new 7” from Brian Chase and a truly remarkable release featuring content curated by the wonderful Maria Chavez.”

As you would expect from the collective approach taken with ICM, their events have also formed a big part of connecting is contributors, and Tarnawsky sees plenty more opportunities opening up in the future in this regard. “I’m looking forward to organizing a few events in Vancouver before the year is out. There’s a great store here called Selectors’ Records that frequently hosts shows and I’m working to arrange an event series to coincide with a new batch of ICM releases.”

“From the beginning, I’ve viewed ICM as a collective, and events have been a big part of building that community. Wherever I go, ICM comes along with me.”