Founded in 1999, Berlin’s CTM festival has become a benchmark for underground experimental music festivals. The festival — formerly Club TransMediale — has an enormous scope, describing itself as a place for “adventurous music and related visual arts”. Anything within that bracket is to be expected. Stretching out over 9-days, with 15 venues and 173 acts, it can be dizzying trying to see even a fraction of the events being held. There are exhibitions of light, sound, DJ sets, interactive workshops and talks. Given this, any review of the festival is going to be only part of the story, but here are a few of our highlights.

Last month, we spoke to this year’s CTM curator, Rabih Beaini. The underlying theme of the festival this time round, he told us, was ‘New Geographies’. “The main focus is how things communicate from one place to another in the world, and how the transformation of many traditional practices are interpreted today and projected into the future.” This is immediately clear from the festivals central exhibition: Seismographic Sounds. Here, multimedia artworks presented a range of perspectives on music today. One billboard read: “‘Gangnam Style’ by South Korean rapper Psy was a first step. Future hit songs and underground trends will come from Africa, Asia and Latin America. Produced and financed locally, without the support of Euro-American agents.”

In another room, a series of screens played recordings from Skype interviews across the world, asking and answering fundamental questions about the current climate of electronic music. When asked ‘can a bedroom producer change the world?’ there were philosophical responses from AGF, “the question is can we have 7 billion forms of creativity”, as well as some from more fatalist contributors: “not if you stay in bed”. I had heard of the brilliant Disarm project through Beaini, but seeing it play live was astonishing. The idea is similar to that of Felix’s machines: self-playing instruments triggering sounds using everything from e-bows to piano mallets. With Disarm, however, disused weaponry operate as the fundamental vehicle of sound. AK47 cartridges and boxes of ammunition rattle and shake around the room, giving a chilling depiction of a chaotic war-zone. 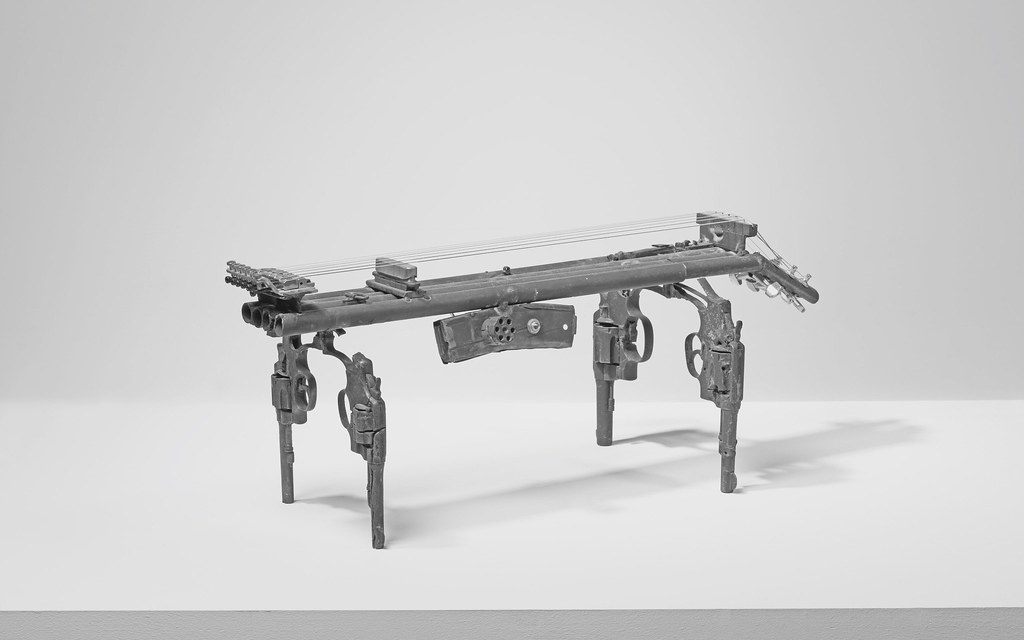 One of the most unique things about the festival is its wide spread of venues. Largely clustered around Kreuzberg, there’s a good excuse for walking through Berlin’s graffitied side-streets and overgrown parks. One such venue that is always a treat to visit is the colossal Kraftwerk, a once abandoned power-station above Tresor that now holds some of Berlin’s most exciting events. It was here that ‘Deep Web’ was situated — an awesome audiovisual performance from Christopher Bauder and Robert Henke. Set to dust covered drones and musique concrète, this exhibition is a spectacle of dangling baubles that lift and fall, creating intricate constellations of light and motion, giving the illusion that they are free falling. Now, it’s fair to say that almost anything held in Kraftwerk is going to stunning. But Henke and Bauder have used the space to its maximum potential, giving the structure an oddly animated feel between its concrete pillars. The idea of the ‘web’ too is significant. The spheres of light work together like a network of nodes, a geometric representation of the cross-continental influence of the ‘new geographies’. 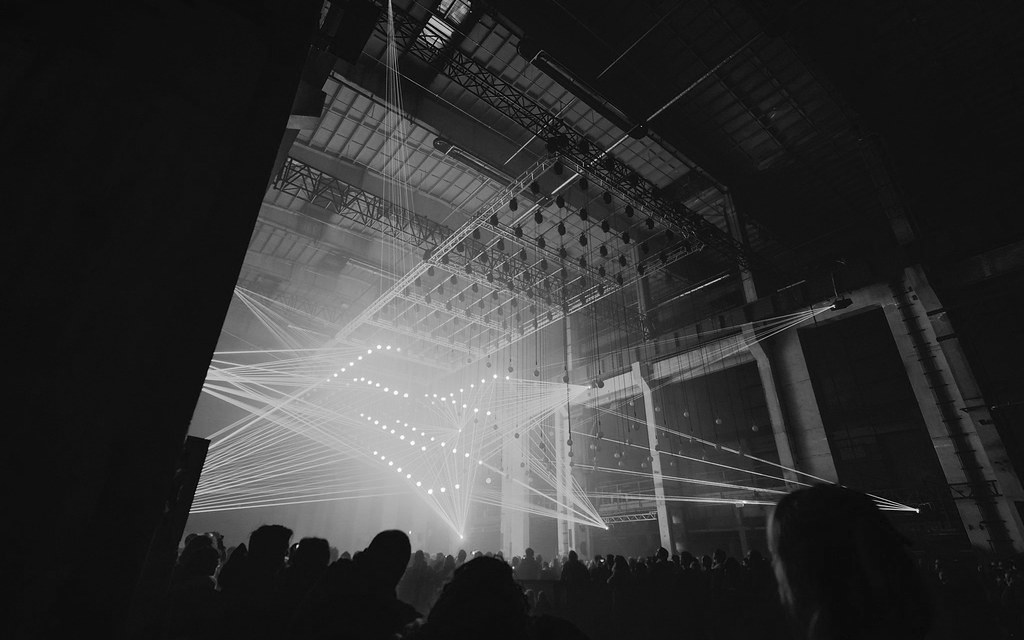 CTM also hosts talks throughout the festival with its various contributors. This gives a face to many of the otherwise anonymous exhibitions, and furthermore provides a much needed context for the diaspora of events. For example, if you can stand the noxious corporatism, the Red Bull Music Academy host interviews with some of the festivals most celebrated artists, this year including Pauline Oliveros and Keiji Haino. I caught a talk with Mumdance, who shared the intricacies of his production techniques and explained the roots of the ‘weightless’ style. There were also workshops on circuit bending and instrument building.

Arguably the most celebrated of the various venues that can be explored throughout the week is Berghain and its Panorama Bar. Given the venue’s notoriety for its door policy, and countercultural clientele, it was only a matter of time before it became too famous for the underground and had to shed its dogmatic loyalty to the techno genre. This is probably a good thing too, since what’s the point of a counterculture that has its doors closed to difference? It was interesting to hear how the unfamiliar timbre of noise, drone, trap and R&B sounded inside. It questioned a previously held belief that the dominant rumble of brooding Berlin techno has an inherent association with the building’s architecture. The truth is that the venue is too good to be ghettoised into a single genre.

Japanese duo Group A, for example, filled with the space with jarring viola tones and deafening screeches. Aïsha Devi & Tianzhuo Chen by contrast washed the walls with tidal waves of reverb-drenched atmospherics. Neither sounded displaced or unwelcome there. In Panorama Bar too, Jlin, Nidia Minaj, nkisi and KABLAM brought together sounds more current or futuristic than anything I had heard at the festival, or at Berghain previously. There were high definition sound effects, hyperactive vocal loops and even Erykah Badu’s remix of ‘Hotling Bling’. Surprise guest performances from Nina Kraviz and Bearice Dillon are also always welcome… 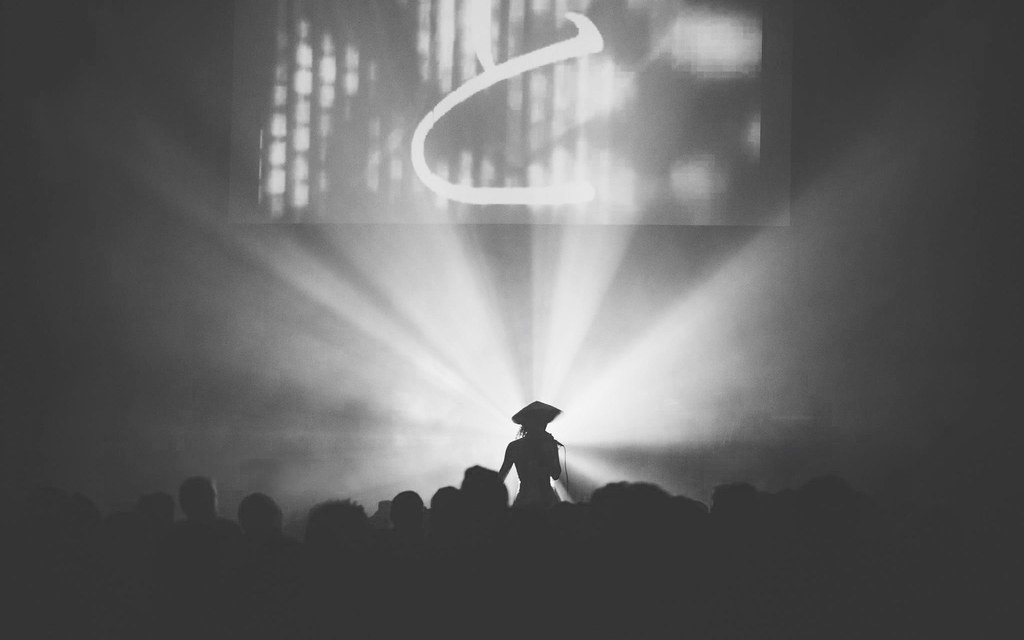 However, the appearance of Hatsune Miku was perhaps the most anticipated of the festival. ‘Hatsune Miku’ translates as ‘first sound of the future’. This couldn’t be more apt, since the blue-haired “virtual pop star” is spearheading a new form of music production and consumption. Using a ‘Vocaloid’ vocoder synthesiser that samples the voice of Saki Fujita, Miku’s fans are capable of writing songs for her. Consequently, she can boast over 10,000 singles released across continents, and fills out stadiums of adoring fans, performing as a 3-D hologram.

But ‘Still Be Here’, the performance showing at CTM, was quite different. Rather than a standard setlist of her most popular singles, ‘Still Be Here’ was a conceptual piece about the identity and idea of Miku herself, soundtracked by the brilliant Laurel Halo. As people took their seats, a creepy childlike voice explained in meticulous detail the legalities of writing music for Miku. Between footage of her various guises, performances and cosplay-wearing fans, we also heard conversations with the creator of the project, as well as cultural theorists discussing the significance of such an idea through the lens of gender politics and the ‘future’ of capitalism. As the pop star’s reality became more and more scrutinised, it became clear that what her fans really love is not so much Miku as an individual, but rather the collective engagement and camaraderie of all her creators. 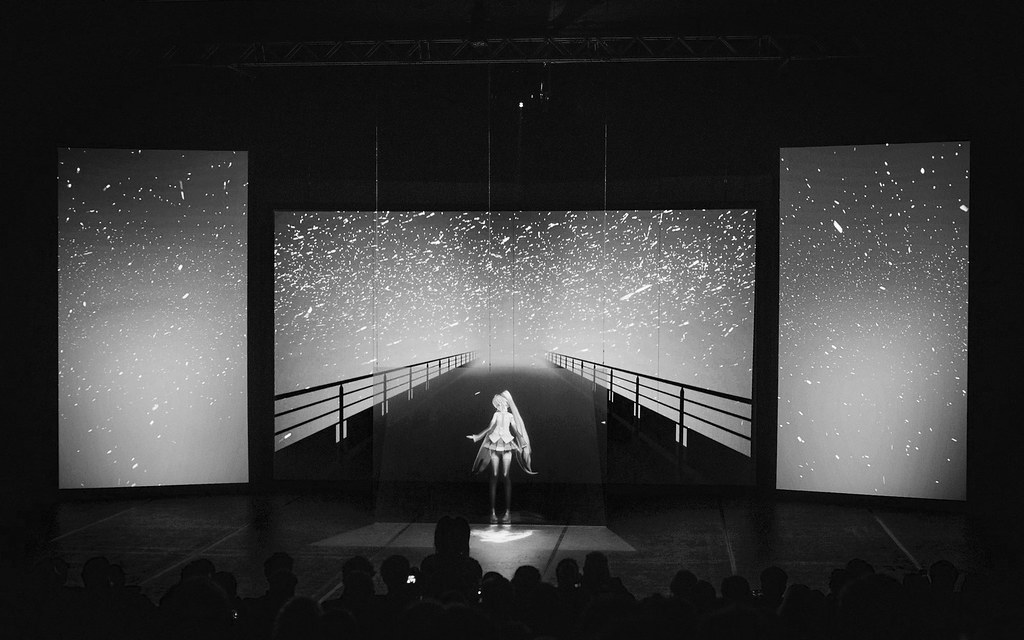 Prev in articles: Dada 100 Years On // Cities and Memory