Until 1999, Norberg was probably best known for its history mining and refining iron ore. Amongst enthusiasts, it is also home to the Engelsberg-Norbergs Järnväg railway, which is now protected as a heritage site. Located a couple of hours outside of Stockholm, these days Norberg has a new attraction.

Despite running since the close of the ’90s, ‘Norbergfestival’, has seen numerous incarnations. First founded by Michael Østerz Christiansen and Dag Celsing, these days Norbergfestival is run by ‘Anrikningsverket’, a non-profit organisation which holds responsibility for numerous other events in Southern Sweden.

The fact it is volunteer-led is a large part of the festival’s success. Attendees are invited to exchange their time and labour for free attendance, basic sleeping provisions, food and generally, a really great time. It’s my guess Scandinavia’s unparalleled social and welfare care is something to do with the fact people are so willing to donate their labour for free, although visitors come from all over the world.

One of the biggest attractions of Norberg for me was the opportunity to immerse myself in a mix of unfamiliar sounds. As the year starts wearing on, with more and more weekend events announced, I can’t help but notice the same names cropping up again and again on different bills. Norberg felt different. There were a number of expected big-hitters such as Peder Mannefelt, Aisha Devï and Amnesia Scanner, but the festival also takes an active role in promoting lesser known, local talents. Stockholm based Sissel Wincent makes a good example, delivering a set of booming live renditions of her recent ‘Illusion of Randomness’ EP. So do acts like Staycore, Copenhagen based Apeiron Crew and the ‘Stockholm Drone Society’ with whom Maria Horn and Posh Isolation producer Mats Erlandsson count their names. 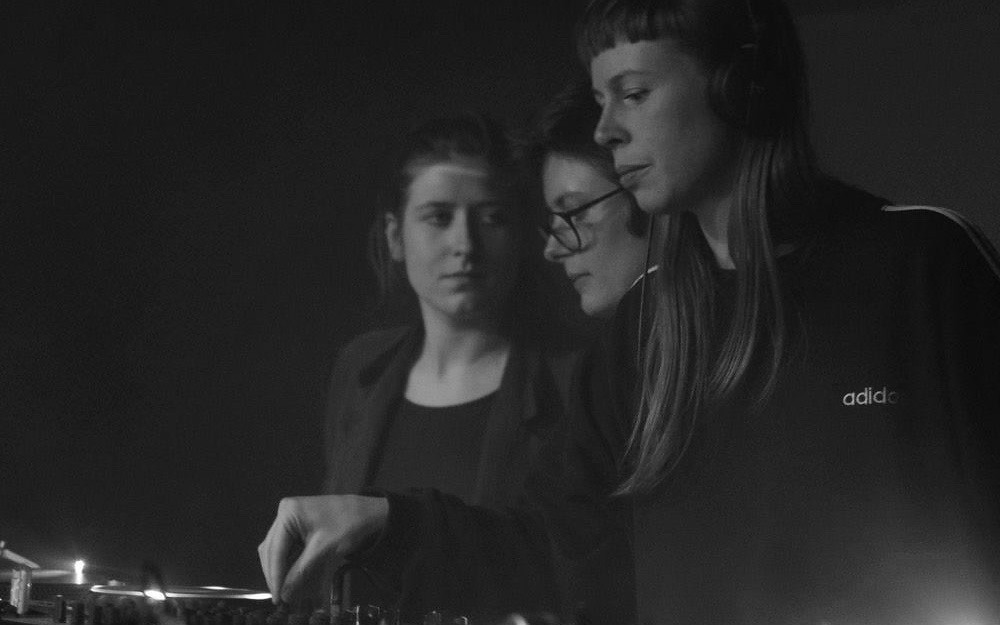 Apeiron Crew at the 303 Stage.

It is worth noting that Norbergfestival is also completely gender balanced. This is a fact scarcely mentioned, which is a shame as most competing festivals struggle to book even a handful female artists. Bloc is a good example - after coming under fire last year they vowed to rectify the situation in 2016, yet I believe the number of female acts still amounted to less than 20% of the demographic. Norberg’s approach to artist curation is also reflected in the attendees - roughly equal numbers of men and women coming to enjoy the experience, with the kind of friendly, respectful atmosphere you’d expect to accompany that.

Much like Berlin Atonal, the venue forms a large part of the attraction at Norberg. Mimer, the actual mining facility ran from 1960 to 1980, at which point (like many parallels in the UK), the industry was capitulated and the operation abandoned. Being a site of historical interest the building was gutted but survived demolition, in part due to its revival as a venue for musical happenings (the original founders of the festival collaborated with local councils to run the first event in 1999 and local authorities have heavy involvement to this day). In my opinion, the parallels with Berlin Atonal stop there however. Norberg felt more rounded, more inclusive and above all, significantly more fun. 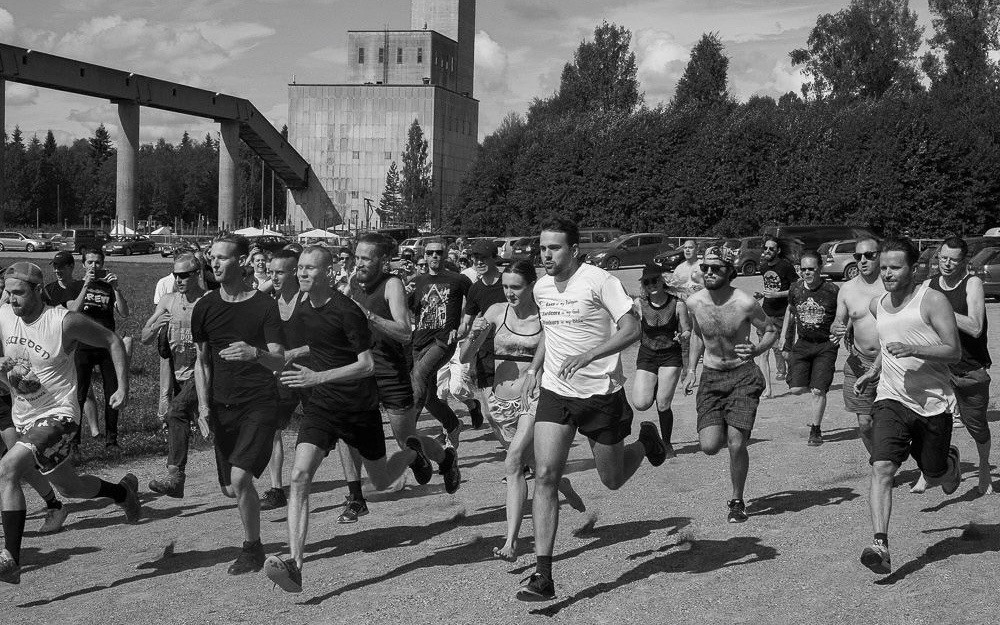 As well as the performances for example, we were treated to morning yoga in a local park, soundtracked by the mechanical dub-techno and languid acid of Kliin and Curt Lundberg. We were also invited to ‘Acidruset’, a race round a nearby field track complete with squelching acid soundtrack (rather than the substance, which I was told a bemused local reporter in attendance had inquired about).

Musically, the festival also seeks to entertain rather than intimidate. It has had a long history with breakcore and jungle acts, and this year Sully and DJRum represented the higher tempos. Both were unexpected standouts for me, filling the festival’s ‘Kraftwerk’ building with clamorous, pore clogging footwork and knockout jungle. The venue’s sound system provided some of the most visceral experiences I think I’ve ever had, the low end penetrating my body so thoroughly I could feel my windpipe rattling. Looking up through the projector beams it was sometimes possible to see gentle trickles of dust from the ceiling.

There were other slightly theatrical elements turning heads throughout the weekend, for example DJ Mayhem marching to the 303 stage clad in black ski masks wielding banners and flares, or Gabor Lazàr’s onslaught of metallic modulations through a layer of blue light and smoke so thick you could barely see your hand in front of your face. 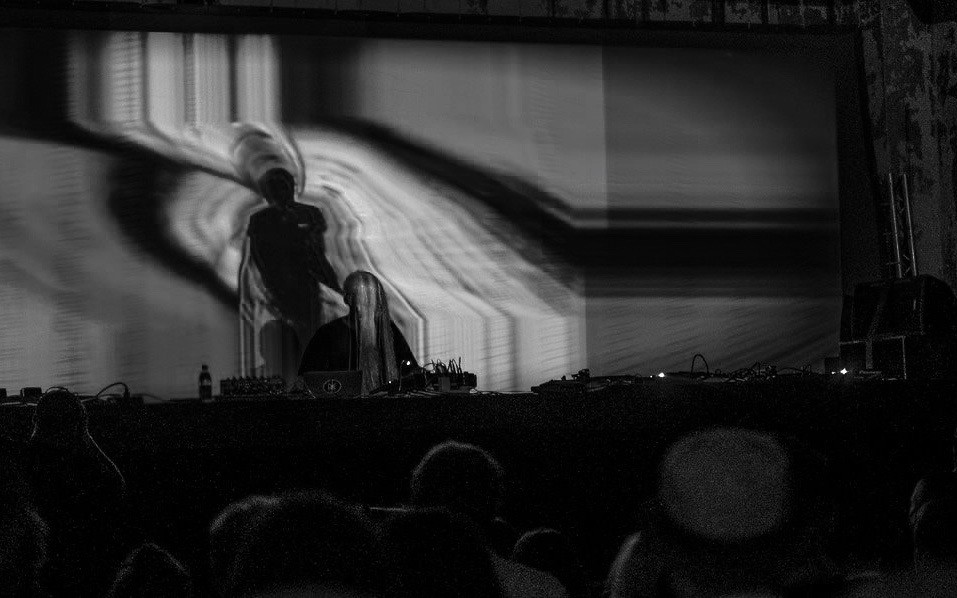 Peder Mannerfelt took the performance aspect into the surreal, donning the stage with his signature straw covered mask, expelling wild resonances and mounting sawtooth assaults in front of psychedelic projections. These saw a shirtless Mannerfelt floating through a kaleidoscope of colours that’d put Acid Mother’s Temple to shame, while the man himself jerked to and fro in front. His set culminated in mangled acid and breakbeat, indiscernible granular vocals bending minds even further.

Perhaps the ultimate theatricality was the Mimer stage itself. Reserved largely for the festival’s beatless excursions, hauling yourself up sheer metal staircases onto the brutalist concrete viewing points felt nothing short of placing yourself in Andrey Tarkovsky’s Stalker. Ewa Justka was one of my favourite acts to perform in Mimer, creating a groaning digital thunderstorm reminiscent of Puce Mary. Sorrowing Christ’s Sunn O))) style drone was equally at home in Mimer, shoegaze guitar and abstracted vocals creating an effect like The Wall era Pink Floyd stretched to 800% speed. 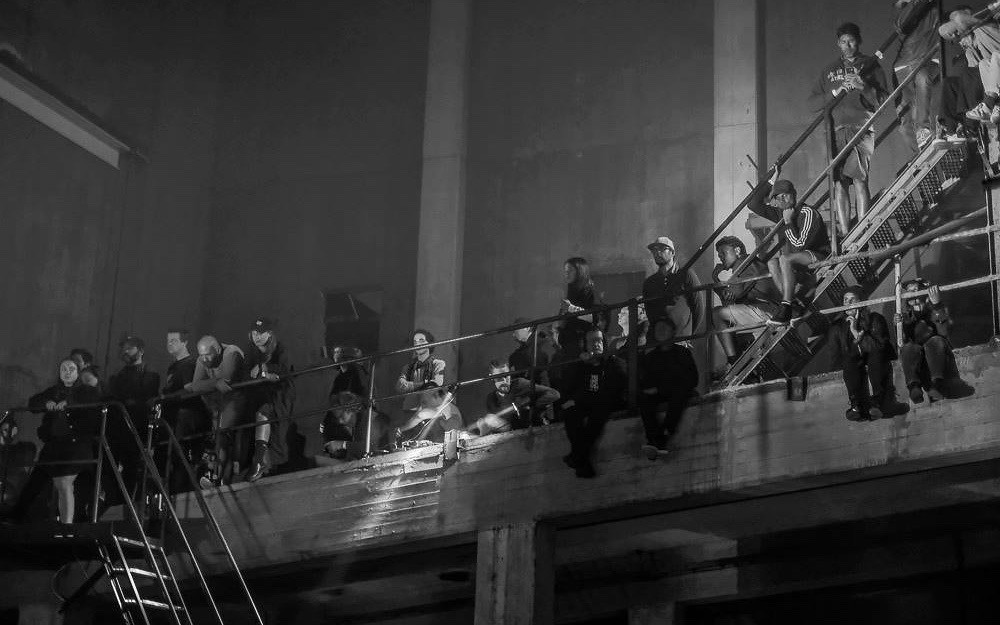 Focusing exclusively on the more conceptual performances would be wrong however, as the festival also showcased plenty of no frills dancefloor fun of all shapes and sizes. DJ Stingray 313 was another unexpected standout for me, delivering a flawless two hour set of pummelling electro. Razor sharp basslines and murderously precise drumwork had the whole of Kraftwerk locked in rhythmic sway.

Nidia Minaj brought a similarly effective set of dancefloor jams of a different nature. Stuttered percussive cuts, jacked up Kuduro and lock jam rhythms set the room in motion, but it’s the clattering, bassed up rendition of Rihanna’s ‘Bitch Better Have My Money’ which sticks in my mind the most.

Speaking of memorable performances, I’d wager most people’s take-home stories included at least a few words on Amnesia Scanner. Standing at their control stations in pitch black aside from two roaming technicolor searchlights, the duo cast an Autechre-like stage presence. The parallels with Warp’s best export don’t end there however - an hour of computerised paranoia, modular abstractions and bit-fucked grime reductions built to a rapture like climax, before the crowd was blasted with cold air and a sudden cut to silence. 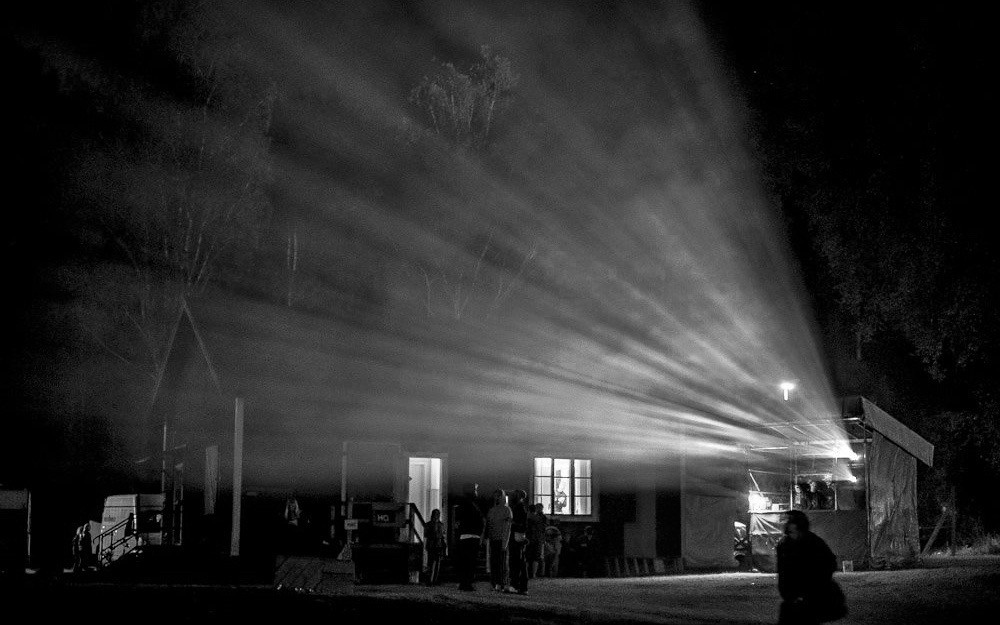 Norbergfestival has been running for 17 years now. From relatively small scale beginnings as something which sounds to me more like an extended free party, the festival has mutated through different genres and stylistic outputs, growing to the diverse, inclusive and well-rounded experience it is today. Despite the progression however, Norbergfestival has remained small. Around 600 tickets are sold on average, and to my mind it’s small scale nature is one of the things that makes it so memorable. It’s impossible to believe this has been achieved without a great deal of love, sweat and hard work. Amazingly, these efforts are given freely without the need for large investments, and while I’d normally be opposed to such wide-scale unpaid labour, I found it impossible to find a member of the volunteer crew with a bad word to say about Norbergfestival.

Whilst I can’t claim a share of the pride this team that have made it all possible are rightly entitled to, I’m honoured to be able to say I’ve attended something which I believe is very special, and should be cherished for as long as it’s able to exist. If you get a chance to go, I thoroughly recommend it.

A video posted by Stray Landings (@straylandingsrecordings) on Aug 3, 2016 at 6:16am PDT

Prev in articles: Music is the Catalyst // Terraforma 2016