Laurie Osbourne aka Appleblim has one of those faces which has become synonymous with late-noughties dubstep. Co-founder of the legendary Skull Disco label alongside Sam Shackleton, Osbourne is also owner of the Apple Pips label, and has been a fixture at some of the most important nights in dubstep, such as FWD>> or Scuba’s Sub:stance.

In the production world, Osbourne has been a frequent collaborator, appearing on records with the likes of Ramadanman, Komon and Gatekeeper, garnering attention for his off-kilter drum programming and dub inflected synth-work.

With a new collaboration on the horizon this time with Houndstooth favourite Second Storey, we decided to catch up with Osbourne, to discuss his upcoming performance at Bloc festival, studying at Bath Spa, and what’s next in store for the now London based artist.

The first time I saw you play was back in 2010 at Berghain’s Sub:stance night just when Berlin seemed to be getting steadily into Dubstep. Do you think your approach to DJing has changed much since then?

Hmm not really, I mean I try to be as eclectic as possible these days, within the context of the event. I wouldn’t start dropping prog-rock at Rinse.fm at MoS, however I will play Grime, House, D&B, Electro, Noise etc. That stems from my experience warming up at FWD>> or Sub:stance being given the freedom to play with people’s heads, playing some quite ambient/sparse music on a massive soundsystem or even some jazz is a great experience all round. My mate Gatekeeper put it well the other day, you have to remember that essentially you’re getting to hear a load of music you like really loud on a good soundsystem. The enjoyment of that should be the start of any vibe at a DJ gig.

You’re making an appearance at this year’s Bloc – you’ve performed at the festival before right? How were the previous experiences and what can we expect this time round?

Well there’s quite a few different snapshots - the first time I played was as ‘Skull Disco Soundsystem’ with Necta Selecta, Shackleton, and maybe Pev too. The response was brilliant, I mean it was in the pub bit of Pontins which was great - like an episode of Phoenix Nights or something! It was very sweaty, people were climbing on the speakers and the stage - proper shirts off raving. I remember tunes like ‘Roll With The Punches’ by Peverelist getting pulled up! That was exciting as it was the first tome I’d seen music made my people I know illicit such strong responses, very exciting and one of the major buzzes of being involved in music. Then I played for Subloaded on their stage at Bloc a couple of times. Always great vibes, getting Crazy D hosting, or Dread MC, or Sgt Pokes - these were great hosts and it’s such fun to play crazy new rhythms and watch them react…

You’ve done a fair few different 12”s with Komon over the last couple of years – how did the two of you first meet? What do you think it is about the collaboration that works so well?

We met through Wedge/Bleecker and Addison Groove/Headhunter. Him, Tony Addison and White Boi used to do a show on a pirate station in St. Pauls when it was still pretty gully around there, so we went and played on that, and they played on Wedge’s Sub FM shows. Friendships were formed - Komon helped us move house from Bath to Bristol when we barely knew him, testament to his nature!

Anything new in the pipeline for Apple Pips? You had an amazingly fruitful year in 2013 with six different releases, why the break over last year?

Life man! I’ve moved back to London, and have been concentrating on my own work in the studio which is finally bearing fruit. Apple Pips will definitely be back this year with both some solo and some collab work… I’ve got a lot stockpiled which I’m actually really happy with so that’s good. 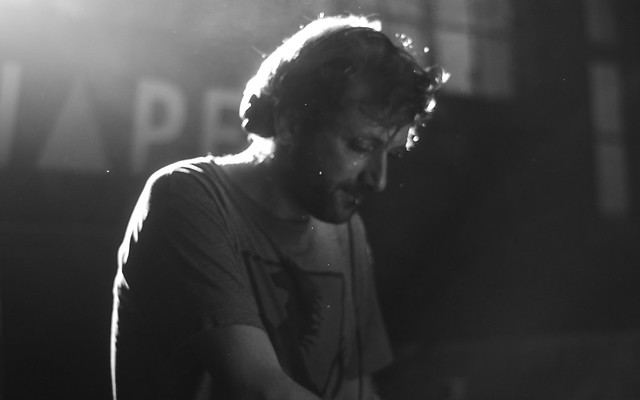 I looked at the same course you were on at Bath Spa (and really regret not taking the position!) How much of an influence do you think the course had on you in general? Were you producing much before?

I wasnt producing at all, so really it formed me entirely, but it was the combination of both the course, the other people on the course, my producer housemates and having the time and space to start the Skull Disco label. All that combined… but the course definitely made me think about music more deeply - it helped me see it’s potential, to see that all sound can be music. It also developed my love and respect for experimental music.

What kind of thing were you listening to growing up? Was electronic music always the focus?

Well pretty standard white-middle-class-male listening I’d say! Hip-Hop, Pop lots of Indie and noisey guitar music. I was a real NME reader and actually found a lot out about stuff like the Ragga Twins, Shut Up and Dance and Autechre through the NME. Also the rave era was happening when I was at school so tapes were going round - Colin Dale, Colin Faver, Top Buzz, Easygroove etc. I went to my first rave in ‘92 at Hypnosis with Sasha, Jumpin’ Jack Frost and Njoi all on same lineup!

Have you noticed much of a change in the Bristol scene over the last few years? There still seems to be a lot of interesting things going on in the city although the focus has changed somewhat – any producers/collectives in particular you have been keeping tabs on as of late?

Its hard to say because ‘our music’, the bass scene or whatever you want to call it, definitely refracted and after Pinch stopped doing Dubloaded. It definitely felt that house was taking over a bit. Of course you had Young Echo and so on who did great experimental nights at their studios which were ace, but these were much smaller nights than the 1000+ raves Pinch was doing at one point. I’m sure there’s tonnes going on under the surface but I’m less in touch as I have been doing much more inward looking self-exploration on my own vibe in the studio, rather than going out raving or DJing recently.

There’s a great new night back on at the Old Croft called ‘Who Cares’ which is a core of people from the bass days plus some others who wanted to bring back the vibe of Dubloaded - midweek, positive vibes, and they do a cool thing where there’s a bunch of residents like NY Transit Authority, Jus Now, Break, Addison Groove, Joker and so on, and then they get one or two secret headliners every time as well. It’s great to see new people in Stokes Croft catch the inclusive and positive vibe of these DJs and musicians, it’s a real Bristol family affair…

You’ve talked quite a bit about your formative years playing FWD>> nights at Plastic People, how did it feel to hear about the club’s closure?

Very sad but I bet they do something else. To be fair i think they struggled with the sound restrictions, and maybe it’s good to move on and try something new…