Providing the inaugural release for Ben UFO, Pangaea & Ramadanman’s legendary Hessle Audio imprint would seem enough of a claim to success for most electronic musicians. For Romanian born Cosmin Nicolae aka Cosmin TRG however, this is just one of many examples of the staggering recognition of his craft, having released for the likes of Hotflush, 50Weapons, Tempa & Hemlock Recordings previously.

The range of different label’s that have played host to his productions suggest Nicolae has never had an issue with creative freedom, yet he has recently taken matters further into his own hands, setting up his own label, Fizic.

With the first release on the imprint released recently and an upcoming show at Fabric tomorrow evening, we decided to catch up with Nicolae to discuss these topics, as well as photography, creative freedom and the changing Berlin landscape.

Hi Cosmin how are things? You’ve just got back from Australia recently after three gigs in two days. How did it go?

Always great fun down under, and this time was really special as I was part of this incredible line-up with Hot Chip, Matthew Dear and Xosar among others. We played two big shows in Melbourne and Sydney so there were some school trip moments when we really bonded. The crowds were great, promoters extremely nice, which made this whole “fly to Australia for two days” business seem like a decent thing to have done. I’m especially fond of the after-party I played in Melbourne, it was really fun to also play music that I rarely get to play.

I was reading your 2013 LWE interview - you mention wanting to reach a level of Zen where this kind of trip wouldn’t faze you after a similar trip to Melbourne for a few gigs. Any better this time round?

I somehow managed to pass out for most of my flight over there, which is no mean feat considering I never sleep. The way back, however, was a rite of initiation. There’s a slight sense of murderous paranoia when you wake up to realise you’re strapped in a seat on a bus with wings somewhere over the Pacific with twenty three hours left on it. So I guess that level of Zen is still something to look forward to.

You’re over to London for Fabric on the 21st as well, do you remember the first time you played the club? Any other artists your looking forward to seeing this time round?

Of course, Room 3 with Hessle Audio in 2009, very nice memories from that night of lots of friends coming to see me play there for the first time. I always look forward to checking out the other artists on the bill, obviously my Room 2 colleagues A Made Up Sound and Phon.o, also Craig Richards is always a great lesson in the craft. Heard tINI for the first time in Ibiza last year and she played some amazing tracks, so I look forward to her set as well.

The name for the new label, ‘Fizic’, comes from a track on your  album Simulat. Translated from Romanian this comes out as ‘looks’ or ‘appearance’, is this correct? What was the reason behind the title choice?

Used as a noun it does mean ‘appearance’, but I used it mainly as an adjective, as ‘physical’. Quite simply, the label is an extension of myself. A reflexion, if you will, the physical manifestation of  ideas and imagery in my head. 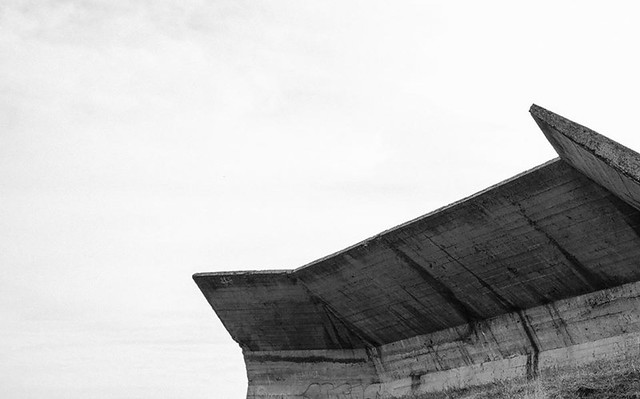 The sleeves will all be photographs taken by yourself as well I believe, has photography been a passion of yours for a long time? With the first release how would you say the photo ties into your concept for the tracks?

I love photography, and for that reason I take very few pictures. I have a very different relationship with photography than other people I guess… I take a lot of time with the places or people that I want to photograph, to capture their essence. The best photos are the ones I haven’t taken… The one I took for the cover of my record is very special to me. It’s a concrete structure in the middle of nowhere, that I’d been waiting to photograph for most of my life.

In a sense, it was like I appropriated that structure, made it a part of me by taking its picture. The tracks have something organic and also something distinctly alien, metallic in them, and that structure is a brutal intervention in nature - just connecting some dots here.

How far ahead do the plans for the new imprint stretch? Fizic is a platform just for your own productions I believe, what was the reason behind setting up the new label? The diversity of your previous releases suggest you didn’t have an issue with creative freedom on other labels (musically at least)!

Fizic is a platform for my ideas, it just seemed fitting to own an imprint and make something very personal out of it. I always had creative freedom everywhere I released in the past, so that was indeed not an issue. I just felt that it would make a lot of sense to start a channel to present my work, rather than use someone else’s, and to forge my own aesthetics.

Do you think you’ll continue to release material with other label’s alongside the work you put out under the Fizic tag?

If the opportunity comes, I’m always open, there are still labels out there with whom I’d love to work, so I’m not crossing anything out.

It’s been about three years since your move to Berlin from Romania – have you noticed much of a change in the city in the time you’ve been there? What do you think the future holds for Berlin with the number of people moving over?

The city is very much its people - when they change, the city changes… I’ve only been here a short while, long-time residents can definitely see a change in attitudes, places disappearing to make space for other places, I guess it’s only natural. Thing with Berlin is, it has different gears, and you can adapt it to your lifestyle. If it’s 24hr partying you’re after, you’re going to get your fix. If you just feel like chilling out for a bit, you can even forget there’s a party somewhere. But there’s always a party somewhere… I think Berlin is undoubtedly going to get more gentrified, rents are on the rise, but there’s something very intangible about this city that won’t change…