home/interviews/ If You Ain’t Got The Funk Then What Have you Got?Rumah

If You Ain’t Got The Funk Then What Have you Got?Rumah

Rumah (aka Sean Hughes) can, with confidence, claim to be part of the Stray Landings extended family. Having first met through club nights in London, he has since contributed to our very first and most recent nights, compilations and radio shows. During this period Hughes has also been progressing independently onto higher and more established platforms, releasing and collaborating with the much-hyped Church label, and playing regularly at the legendary Corsica Studios.

However, his latest EP alongside fellow Southamptonite Carl Jones aka Progression, finds itself in an altogether more suitable home, aligning their no-nonsense approach to UK techno with the no nonsense precision that Blueprint are so well known for. It’s always difficult to interview someone you know, because any time the atmosphere slides into the convention of a standard interview, it is quickly and strategically dissolved back into the familiarity that is usually shared between you. Instead, here’s just a short snippet of conversation that we had whilst listening to the new release.

Oh why are we listening to this? I don’t want to listen this.

**Well I thought we should talk about the EP while listening to it. **

Oh, no ‘cause there’s nothing to talk about, it just sounds like… techno.

**Well why don’t we talk about the other person on the EP? Carl. **

Carl’s really funny, he just likes making the music and at any point I say something like ‘’you could get some gigs off this you know’’ and try and get him to pursue it, he’s always like ‘nahh…’

What does he do when not making music?

He’s a dentist. Hang on no he’s not (laughs) it’s even stupider than that - he’s a manager of an opticians.

How does the writing work between you?

Well he’s just a better producer than me so how it _used to be _was that I did the sort of ‘creative’ side of things and he did the technical stuff. For ages he was really into the hyper-engineering ethos of dubstep and he was really focused on that Youngsta half-step sort of thing. But now I think he likes that this techno stuff is a bit more rough and ready, and as a result he’s actually got more interested in writing tunes generally. 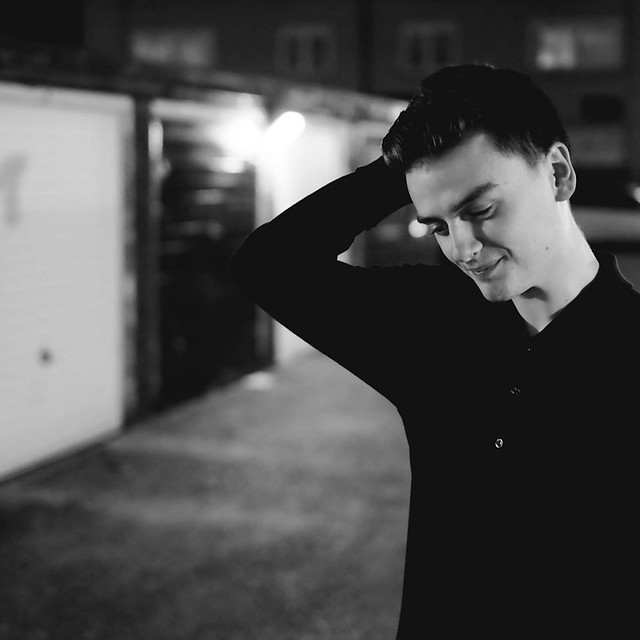 So did you get him into the 4X4 stuff?

Yeah I think so. Because him and me made that EP with the horrible sexist artwork – the artwork was just a woman’s legs with a short skirt on and I said I didn’t want it but for some stupid fucking reason the manager of the label did it anyway. So after that I went back to Southampton for a weekend, about 2 years ago this was, and we worked on some stuff, some of which ended up on this EP. Anyway Carl used to run a night there in Southampton that I used to play at a bit like dubstep and funky stuff. The sound system that Carl got there was ridiculous – like 15k wattage or some shit but no one ever turned up because no-one likes that music (laughs). That’s where we kind of met anyway, I was always interested in what he was playing and I think he came to be more interested in what I was playing.

Where have you heard your EP played out?

My brother says he heard DVS1 or Ben Sims playing it when they were playing b2b at Awakenings. But then again he was fucked on pingers so who knows if any of that’s actually true.

Do you reckon you’ll stick with this ‘German-style’ techno for a while?

Well being with Blueprint is a dream come true, and James Ruskin is one of my favorite DJs. But in terms of the sound I think we want to move away from the tool-oriented kind of stuff, I want to do some more melodic bits. There was a time when we tried to go harder, and I remember when Blawan etc were kicking off, I don’t think I knew anyone who wasn’t trying to make tracks like that. And I remember making tracks with Metrist and people of that ilk and they’ve definitely gone more in that direction, making it more abstract and weird, which I think is cool, but not necessarily for me. If you ain’t got the funk then what have you got? I think this (Creech) is the best track on the EP. It must be like 3 years old now ‘cause I remember sending it to Church.

Are you still playing with Church?

Yeah, less regularly than I used to but it’s still going. They’re really good at just trying to push everyone on the label like I think Viers has got something lined up. Viers is sick, he’s like stupidly young and ridiculously talented – he does Unklone as well who do stuff on Fifth Wall. He can do dutty as fuck techno and house and pretty much anything. He even released a house edit of R Kelly’s ‘Feelin’ on your Booty’ which is like my dream so I kind of respect that (laughs).

Since BPLTD005 is looking to sell out, a repress has already been ordered.