Swedish artist Andreas Tilliander has had no shortage of projects of the years. Since the turn of the millennium he has been conjuring up new monikers like they’re going out of fashion; Mokira, TM404, Lowfour, Komp, Svaag and Rechord are just a number of his assorted aliases, each displaying a different of Tilliander’s angles on dub-heavy electronica and minimal-leaning hardware techno.

One such project to be brought back to life recently has been Kondens - a collaborative effort with Stefan Thor. The first release from the project since 2011 emerged on Börft Records’ Soundcloud page last month, and it has recently transpired that a second 12” will be released via Ulf Eriksson’s Kontra Musik additionally. With this, alongside a new mix CD for Enter.Ibizia due out imminently, we decided to catch up with Tilliander to discuss the project, veganism, and his first meeting with Kontra label boss Ulf Eriksson.

Hi Andreas how are things? You got back from Japan recently - what were you up to over there?

Hello there. I’ve just returned from a month in Japan - I believe it was my tenth time in the best country that I can think of. I stayed for an entire month, but it was still hard to leave. Once when leaving Tokyo, I burst into tears on the plane. It was close this time too, but I managed to keep a straight face and kept my cool!

The main reason for staying one month was to do field recordings and make music with my partner Elin Franzén. We got some fantastic art funding from Sweden and the result will hopefully be an album in 2016 or so. While in Tokyo, I also interviewed some artists for my radio show, and I even had the time to do a few gigs too.

I believe I’m right in saying you’re a fellow vegan - what’s it like food-wise over there? When did you make the decision to become vegan in the first place too?

Nowadays it’s super easy to be vegan in Japan! We were eating at different restaurants almost every night and I have to say that none of them were disappointing. In 2001, I was in Japan for the first time. Back then it was difficult finding any vegan food at all and I mostly ate fruits, crisps and rice really. Nowadays, I have lots of friends in Tokyo, but mainly I rely on apps and websites like the excellent Happy Cow, which is a place where you can find vegan or vegetarian restaurants almost anywhere. Tokyo is no exception. In fact, I think that Stockholm is harder. Stockholm, the city I’ve lived in since the late nineties, is trying to act like it’s a big city with lots of everything for everyone and still there’s only one vegan restaurant in the entire town. Shame on you, the “Capital of Scandinavia”!

You have a new release under the name Kondens alongside Stefan Thor this month which will be the first one from the project since 2011. How did you first meet Stefan and what sparked the return to the project?

We met when we were, or at least I was, very young. He’s about four of five years older (I never figured out exactly) and he was studying art at a local school in the tiny town of Hässleholm where I grew up. Apparently, the school’s kitchen caught fire one day so they all had to eat at my elementary school. Stefan was dressed in black and wore Dr. Martens. I was twelve and super impressed to meet somebody that had the same outfit as I. I remember approaching him and deliberately stepping on his shoes while asking if he was going to come to the industrial concert at the local youth club next Saturday. He replied in a cool way that he and his mate were the ones performing. I got very impressed and I even bought a t-shirt on the spot. So at the concert, There were three people wearing the same shirt - the band on stage and me.

Stefan and I have been close friends ever since and we’ve made music together since the nineties or so, but just as a way of hanging out really. Other people sit on a sofa and get drunk. Stefan and I connect our synths and drum machines, mix some drinks, talk about life and art and record at the same time. Just like most people in Skåne, the southernmost part of Sweden, Stefan often takes his car and goes to Germany to harvest looooads of alcoholic beverages. So every time we meet, he makes rum drinks for us. Sometimes a bit too many though. We have no rules whatsoever, apart from having fun and making something that is slightly weird yet with a swing. We put out two vinyls on the dear label Kontra-Musik and got remixed by my old idol Substance from Chain Reaction as well as the very talented and fun Berghain resident Norman Nodge. Following that, we did some gigs but mostly ended up playing at house clubs, so what we did was perhaps a bit too strange.

Stefan had a second kid and I started working on my TM404 project, so things were put on halt for some years. The reason we returned to the project now is that we have about two hours of decent recordings and I guess it would be a shame to just let it sit on those tapes and rot.

You also returned to your Mokira alias recently, releasing an EP with Swedish label S.E.L.F. You mentioned the tracks are 7-8 years old in an earlier email - how did they come to be passed on to the label? Is Mokira something you’re going to be carrying on with?

Yes. Those tracks were recorded for another label actually. But after about two years of waiting for the music to be released, I decided not to release it at all. Then the S.E.L.F people contacted me for some material and I sent them three different ideas. They liked those old recordings, and frankly I’m not even sure I told them that the material is that old. Perhaps they will read this and weep, hehe. There’s a live clip from when I played in Belgium in 2009, where I’m playing that material.

Mokira is taking a timeout, like most of my monikers apart from TM404 at the moment, but I think Mokira is the project that I’ve released the most records with, from the debut on Raster-Noton in 2000 to this years S.E.L.F vinyl. It’s been a long time, but I have to say I’m still proud of all those releases, which I really can’t say about everything I’ve released. 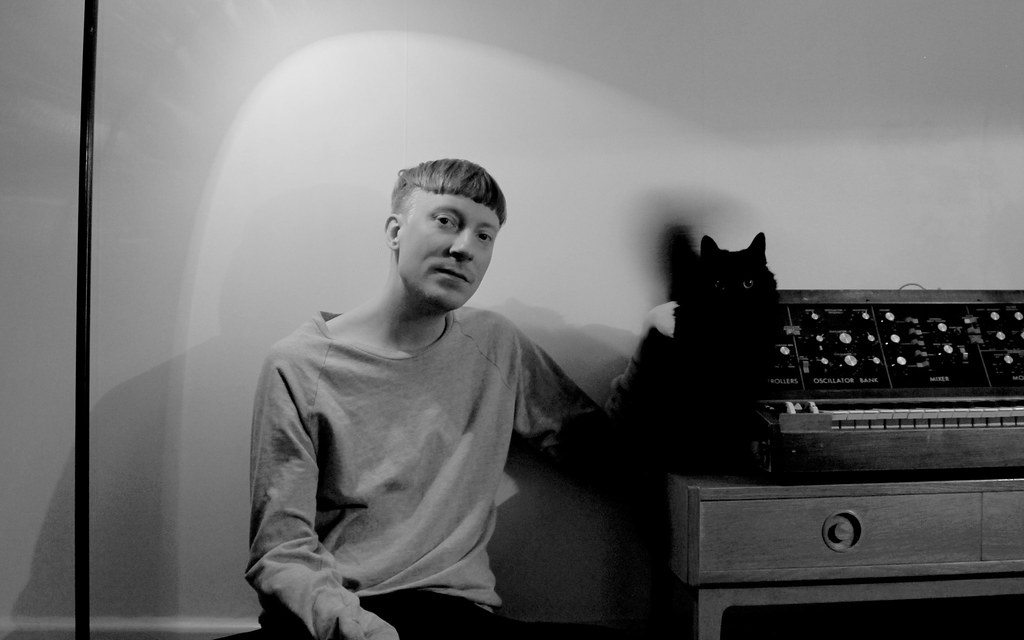 You’ve released a fair amount of your music via Kontra. Ulf Eriksson once told me an in an interview the story of how you first met - he said you turned up drunk and fell asleep at a party he booked you to play at, and that you’ve been friends ever since! Do you remember the time as well? What do you think it is about Kontra that makes such a fitting home for your work?

Ulf and I were just speaking about that. He was actually in Tokyo a few days when I was there. I’m responsible for being the person with the most releases on Kontra-Musik which I’m very proud of, considering the truly amazing records he puts out. It’s true that the first time we met, more than ten years ago, wasn’t optional. I was doing a daytime session at a festival in Malmö and there’s pictures of me having a bottle of red wine by myself during the set. That’s not a good breakfast if you’re also booked to play at a rave in the forest about twelve hours later! I grew up in the south of Sweden, but I’ve Iived in Stockholm since I finished school, so every time I return to the south I try to meet up with old friends. And that sometimes involves drinking too. I remembering being at the venue but feeling too tired to perform with the trio I had at the time with Mikael Stavöstrand and Johan Skugge. We were called Bulgur Brothers and while the other two brothers were on stage performing, I was in the backstage area on a sofa waking up every now and then thinking to myself “Oh, that sounds great! Hope it’s us performing right now!” It’s a fun memory, but it’s also an isolated incident. Never again did I get too wasted to perform. Which is perhaps a good thing, otherwise I’d have to release on so many labels.

Speaking of the Swedish scene - I believe I’m right in saying you master the releases for Finn Albertsson’s Sonuos imprint. How did this come about? Is mastering something you have always done or something you’ve got into fairly recently?

That’s correct. Fun fact - When I was 15 years old, I had a local radio show about strange electronic music and I interviewed the much older Finn. Well, at least in those days he was much older. Since I’m considered a grownup too nowadays, it feels as if we’re the same age more or less. Anyway, I was a fan of his music 25 years ago and he has the most perfect taste in music so how could I turn down a request from him? I even did a Mokira remix for one of his releases.

I’ve mastered since the late nineties and there’s been a few hundred records that have been through my compressors and EQ’s in the studio. Recently, I’ve been too busy doing my own productions so I tend only to accept a mastering job when I really dig the music. More or less, I only master the releases for Börft Records at the moment since I love everything they release.

It states on your website that ‘Repeatle will soon be back’ - exciting news! I picked up a copy of the ‘Stay Down’ 12” a few months back which is absolutely stunning. Anything more you can tell us about the future plans for Repeatle?

Great to hear! Repeatle as a label did three dubby vinyls back in 2007. Since then, the label has been silent. There’s a 12” I released in 2001 on the fantastic German label Force Inc called Repeatle. This and some other of my old records will be remastered and released digitally through Repeatle during 2015, whenever I find the time. Apart from that, nothing is planned for my own label. But if a decent vinyl distributor reads this and gets the vibes, hit me up and we’ll see.

What else can we expect to hear from yourself over the coming months? Any interesting projects in the the works over the rest of 2015?

2015 will probably be yet another year of recording for me. I have about three hours of unreleased TM404 material and when I have five hours, I’ll compile it into an album or something. I’m too fond of working in the studio, so I have a hard time actually finishing my sessions if nobody forces me too. I play live almost every weekend, so if you’ve seen me live, you’ve probably heard in which direction I’m heading. TM404 aside, I’ll release the Kondens 12” on Börft that you mentioned earlier and there will also be another Tilliander vinyl on Börft before we hit 2016. I’m doing a mix CD for Richie Hawtin and his Minus label to be released as part of the ENTER.Ibiza nights where I’ll be playing for the third summer in a row. It’s a great summer job and I love Richie, the fantastic crew and everything connected to the possibility of playing somewhat weird electronics to the Ibiza crowd. Ibiza is so much more than just Avichii, Swedish Mafia House, Steve Aiko, Deadmau6, Hardwall and so on.