Many people will have heard Alessandro Cortini without knowing his name. As a touring member of Nine Inch Nails since 2005, Cortini contributes some of the band’s most jaw-dropping sonic pyrotechnics, as well as writing fresh material such as on their five-part instrumental album, Ghosts. Just listen to the lumbering industrialism of ‘19 Ghosts III’ or the Lynchian ambience of ‘25 Ghosts III’, for example.

But to understand Cortini’s music in terms only of NIN would be to ghettoise a great artist. This has been patently clear through the development of his solo career, under a range of different monikers: SONOIO, Blindoldfreak and Modwheelmood. But under his birth name, Cortini has established himself with seven albums to date, including releases on both Hospital Records and Important Records. I first became of his solo work from 2014’s brilliant Sonno (Italian for ‘sleep’), a somnambulistic meditation on time, dreams and memory.

Cortini is known among musos for his erudite ramblings on gear. Name-drop any classic synthesiser is like opening a Pandora’s Box: Cortini will give you its history, mechanics and sound; its contribution to a genre and the artists that made it famous. The truth is, Cortini thrives on this kind of talk. It’s his calling, his one true love, and that passionate for gear comes through in the music. Just take a look at his YouTube channel, littered with instructional videos on how to use his equipment.

But consequently, many interviews with Cortini focus purely on the technical, which can overshadow the more personal elements of his sound. AVANTI, his latest project, is perhaps the most personal yet. A 45 minute film, live soundtracked by Cortini, depicts his childhood in Italy, shot by his grandfather on Super-8. Earlier this year, we caught up with Cortini to talk about AVANTI, the intersection of sound and vision, and the return of Nine Inch Nails.

I saw your AVANTI show at Barbican a couple of days ago. How did you think it went?

I thought it went great. I had a great time, the venue was incredible, and so was Sarah Davachi, who’s a friend and artist I really respect. It was amazing, one of my favourite shows so far.

How variable is the AVANTI show? To what extent are you ‘bound’ by the film?

Well it’s a very peculiar way of performing in a sense, I watch the footage as much as the crowd does, and the only difference is that it’s my family, so emotively speaking, depending on the night, I might have a different response to it. This was the fifty-something-th show. So far, it’s still incredibly emotionally charged to be able to play a show about my family. What makes it different for me, technically speaking, is that there are plenty of performance aspects that can change. There’s obviously volumes and EQ, panning and effects, but also intensity and dynamics. I have control of every aspect, I can make a lot of creative decisions during the performance. Another thing that influences me a lot is the context of the show, relating to the technical aspects, how the show has been organised, if I like the promoters and things like that. If something’s not right, it does tend to affect how much I enjoy the performance.

The sound and projection felt pretty much as good they could be, from an audience perspective.

Yes, exactly, I couldn’t have said it better myself! I walked around the room during the soundcheck, which I usually do, and it sounded great everywhere. The projector was super bright too, with a huge screen. It definitely felt like a small theatre or cinema, which is what I had in mind when I was first thinking about presenting AVANTI.

I’ve been thinking about home movies, and how they’re usually very private. What made you want to make yours public in the way you have?

Well, I know that the audience that comes to see the show, and they are thus able to make my movies their own experience. I don’t think they see me, or my parents or my family. I think the marriage of the sound and vision bring out a very personal emotional response. And that seems to be what people tell me when they come out after the show. They’re in tears at times, which is very touching because I didn’t expect that at all! It’s very flattering that something that means so much to me, and is a tribute to my family, could evoke such profound emotions in other people.

Have your family seen the show? How did they find it? It must be quite surreal.

They haven’t seen the show, but they have seen the footage. Sometimes I send photos and videos to my mum and dad, and all my mum says is, “damn, you were fat as a kid!” But they’re very happy. I think it’s probably harder on them, because they didn’t experience those times as I did. Even though it’s melancholic at times, I look back with happiness because I had no fears or responsibilities. The world was a playground.

Having listened to the AVANTI record since seeing the show, I now can’t separate the music from the images of the film. Was this something you intended? That they’re sort of the same thing, woven together?

Yeah for sure, That’s kind of the way it was born. Once I found the visuals, filmed by my grandfather, I wrote the music to them. I do believe obviously that the album stands on its own, and gives an example of the emotions content of the show as a whole. I don’t think it’s just the visuals though. I think it’s also where you see it and how you see it. It would have been hard to release it, as is, as an audiovisual project, packaged as a DVD and CD or something, or to release it online that way. I think the whole package of seeing it in a theatre or cinema or somewhere like that, with the chairs, people around you, the silence right before the show starts, and all those things. I think all that contributes to the experience of the show. 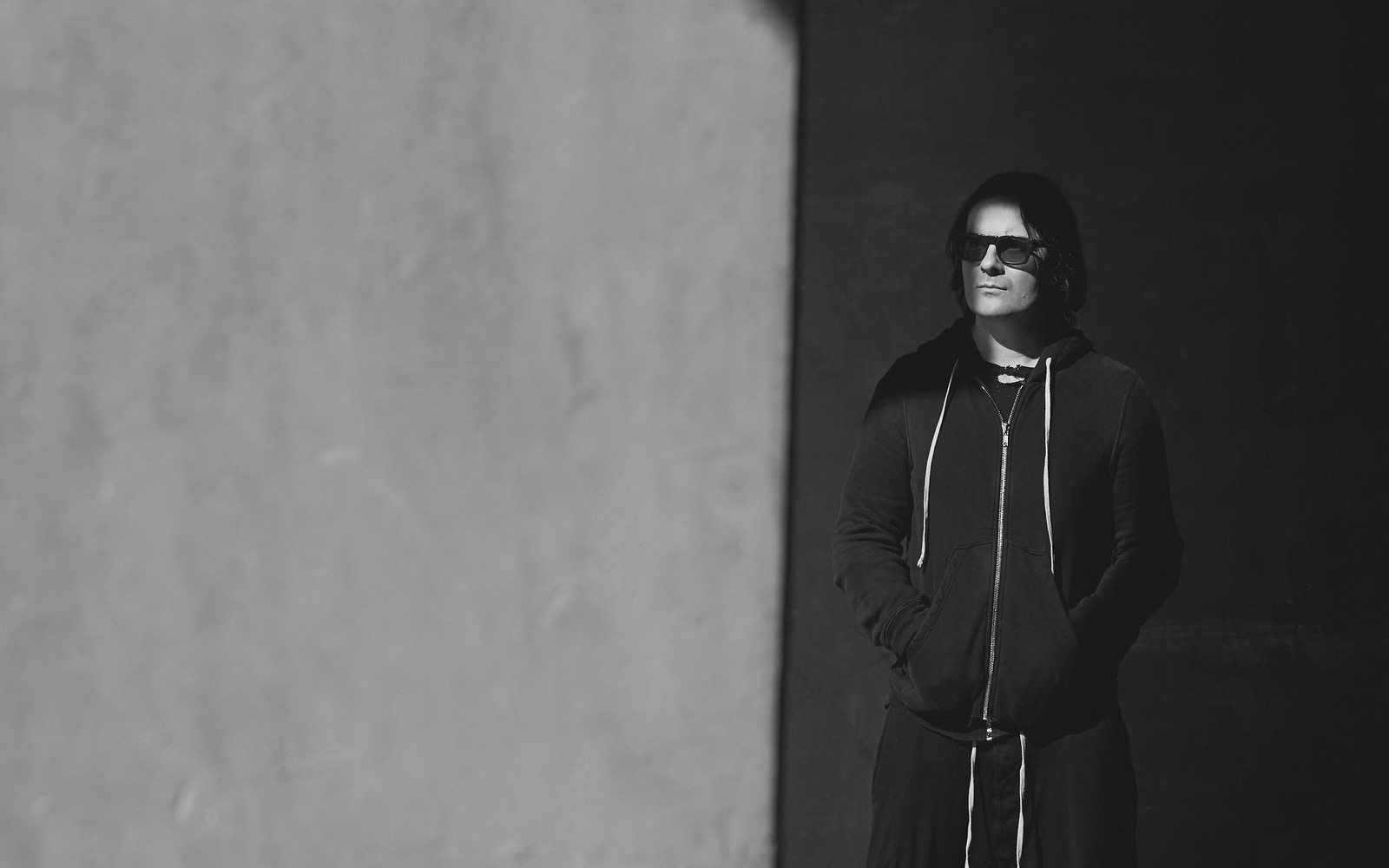 How did playing with Nine Inch Nails shaped what you’re doing today? It seems that they chose you to join the band because you were already creatively talented at the time, so I’m wondering what from your process predates playing with them, and what you picked up from them?

Well it’s hard to say how much of who I was, or who I was going to become, was clear when they picked me. I remember having quite a long conversation with Trent [Reznor] before they chose me, and I think he saw me as someone who was into modular synths, and synths in general, and someone who played guitar. At the time though, I think it was more about hanging out with me. They knew I could play the parts, but I think the idea at the time was to see if I’d be an OK person to hang out with and go on tour with.

Yeah, it was less about what I could do and more about what I was like, because in reality, it’s quite a small fraction of time you spend playing music together, compared to just being around each other and interacting. That said, my priority was always on taking what Trent had done in the studio and rendering that live, and embellishing it. From day one, I was trying to use my abilities to make the band shine more. That led to working in the studio together too, which was a lot of fun.

And there, I really emphasised learning about synthesis and sound, rather than just becoming a better keyboard player. And I learnt so much from him too. Trent is very good at what he does, because he’s being himself. He’s fulfilling the role of Trent Reznor, so of course he’s fucking great at it! We’re actually going to back back together for a tour at the end of this month, so I’m ecstatic to be back with them, and hang out and joke and fart. Just to put something not too important in the interview, there will be a little bit of farting [laughs].

You’ve been quite critical of the culture of Eurorack before, how it attracts hobbyists and collectors but not musicians so much.

Yeah, I don’t know if that came out the right way. I don’t think it attracts hobbyists. A lot of people approached me about that and I feel like I was making a bit of an elitist discussion over it, which isn’t the point. I think with Eurorack, a lot of what you can do comes down to personal taste, and the player being stimulated by what they do. I don’t think that equals value, which is very subjective.

Maybe I’m getting even deeper in the sand here, but the bottom line is that there’s so much going on in that world, and there’re so many options, that 99.9% of the time, if I close my eyes, it doesn’t give me much that I can anchor onto emotionally. There’re are a few exceptions, Colin Benders for example, and Robert Aiki Aubrey Lowe, and Caterina Barbieri, and a few others. But they’re just using it as a tool to do what they want to do. At the same time, I totally relate to the entertaining aspect of Eurorack, for people that use it after a day of work and it makes them feel good.

What’s coming up for Alessandro Cortini?

Well I’m still playing a lot of AVANTI shows, which I’m extremely grateful for, because it’s very rewarding. Like I said, I’m also going to be out with Nine Inch Nails for a good chunk of this year, which will be fun. There’s also a lot of activity when it comes to releases. The Forse series on Important Records will be re-released in a CD boxset with an extra live recording. We’re talking to Dominick at Hospital Records about eventually releasing a boxset for the Sonno/Risveglio series, which will include an extra record that was recorded at the time with the same instrumentation.

There’s also a collaboration with Lawrence English that was recorded at my first Atonal Festival in 2016, which we’ve been meaning to release for a while now. We finally mastered it and it should be out this year. There’s also a Sonoio record, which is my song-based project that I sort of abandoned, but I recorded a full record and finally things have lined up where I feel I can take it off my hard drive and give it to the people that want to listen to it. And I finished a new record, which I finished just before moving to Berlin, because I didn’t know if I’d have a studio here immediately, but that probably won’t be out until 2019, because I’d like to have a show ready for it. I’m very excited to start performing it because it’s quite different from what I’ve done so far. It’ll be me, obviously, but I need to do things a little differently every time. Mostly though, I’m just excited for summer in Berlin.