Ewa Justka live is like watching a scientist from a late-90s thriller at work. A giant bulb strobes and fizzes as oscilloscopes present flickering blue lines, occasionally jumping into mountain range formations. It’s almost possible to imagine sparks flying from her machines as she conjures climax upon climax of crushing, atonal noise in a mesmerising symphony of redlining.

This said, sparks are probably unlikely to actually start flying, as Justka is handy with a soldering iron. A number of the instruments she uses live she makes herself, also selling her creations online. Her Etsy store, ‘Optotronics’ is a trove of the weird and wonderful, from her spider-like ‘JarSynth’s to the ‘MotherFucker’ delay/reverb units. Each artefact is labelled with embossing tape, as if they’ve just been retrieved from a WWII submarine.

In light of this release, and an upcoming performance at Norbergfestival alongside Manni Dee recently announced, we decided to catch up with Justka to talk castles, crescendos and kick drums.

Tell us a bit about your live setup - is there much planning involved or are your performances largely improvised?

My live setup consists of few things: a kick, two claps, a homemade drum sequencer which runs the whole thing, a TB-03, a MotherFucker 2 (home-built weird double reverb/delay, that I sell on Etsy) and some noise generators that respond to light, creating a feedback loop. I guess it’s both improvised and planned. How do you really plan live set? Do you have some kind of notation? Drawings and diagrams with exact instructions, minute by minute? I guess I know more or less how I’m going to start, then what comes next… The basic idea is pretty simple: constant crescendo, things accelerating, until it’s unbearable.

On the subject of gigs, I wanted to ask about some of the best places you’ve played live? I saw you at both Norbergfestival and Fort Process last year and it struck me you get booked in some pretty interesting settings…

I think Norberg and Fort Process are some of the craziest and most interesting places I’ve ever played… Recently I played in this fancy castle/museum in Central London. I didn’t expect it at all! Loads of old paintings, weird sculptures (in fact, I played 10 meters from Henry Moore’s sculpture). A proper, proper posh castle ! It was crazy to play acid in a place like that.

Last week I played at Somerset House with my friend Jayson Haebich at this night organised by Graham Dunning. The theme was ‘deconstructed rave’. It took place in this strange corridor (the venue was called ‘The Deadhouse’). It was very atmospheric - seemed like some medieval underground of Somerset House. I also played on this huge industrial boat one time, Stubnitz, which resonates like crazy. That was pretty cool. Still, the Mimer at Norberg is the best. 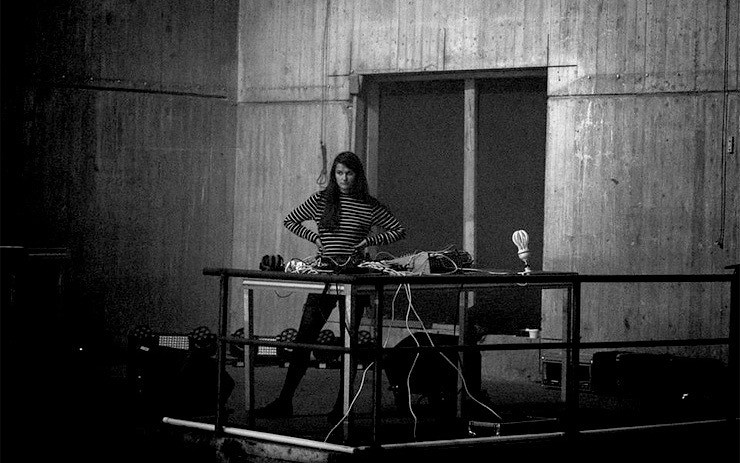 You featured on Manni Dee’s ‘London Isn’t England’ recently. Can you talk us through your contribution to the track? How long have you known Manni for and do you have plans to work on more material together?

Oh, that track is so awesome! But my contribution was minimal. I just read a few misanthropic sentences by this miserable and genius Austrian writer, Thomas Bernhard. That’s all! The rest is Manni’s genius.

We’ve known each other for two years, maybe? We were looking for a flatmate and that’s how we found Manni! We are actually planning to start playing shows together, which is very exciting. Our first time will be at Norbergfestival this year, in Kraftwerk. Kick, smoke, bright lights, hard techno, strange acid. It’ll all be there. Very exciting.

I’m always struck by how little overtly political music there is in London given how chaotic things are. Manni’s release titles have been a rare exception. Is this something that has entered your thinking?

I think art is political in itself (well, it depends how good it is) and one does not have to be super explicit about it. If you make music or artwork which is powerful, there’s no need to explicitly direct it towards political issues, because political issues are universal, if that makes sense. If you make artwork that’s brutal, direct and violent, which I believe my live set can be, in itself it’s political.

Well, obviously it doesn’t have to be brutal, that’s just an example. There’s plenty of subtle and ambiguous artwork out there, that’s equally direct. So you have to explain here what do you mean by political music, really. Does making a title “against racism” or “Theresa May is a cunt” mean being political? I don’t really like the idea of making obvious statements in my work, in any nature. Again, if your work is strong, you don’t need to over-explain it.

You’re from Poland originally right? Whereabouts? What was your first introduction to electronic music and how has your taste developed over the years?

Yeah, so I’m from Warsaw… What a shithole! I sincerely cannot stand being there. But no complains, sorry, this is not what you asked…

I think my sister introduced me to strange electronic music first. I was like 13 years old when she showed me Aphex Twin and some Ninja Tune stuff. Then I took my own direction, (perhaps obvious), towards industrial, noise, industrial techno… All those things. Then contemporary classical stuff like Iannis Xennakis or Ligeti and Penderecki, who I still admire the most. Now I’m really into strange acid techno, ’90s Detroit, Rotterdam gabber, all of those sweet, brutal sounds.

Conditional put out your first release last year. How did you get involved with the label? Are records something that interest you much, or do you see your music as more of a live experience?

Calum contacted me! he’s pretty mind blowing! Great guy. Scottish power! I would love to spend more time now recording things, I quite like it actually. I recently put a tape out on Graham Dunning’s label Fractal Meat, called ‘Acid Smut’. So to answer your question, I think both practices are important for me.

A lot of the instruments you use are made by yourself right? How did you get into this field? Is instrument making a case of happy accidents or do you know what you are aiming to achieve when you start building something?

So there was this time when I was pretty depressed and I decided that the only way to get out of that place is to focus on something very intensively. I went to some workshops and started researching more complex things. I usually know what I want to build, but then I experiment quite a lot. So I guess it’s both, an accident and a plan. Obviously, there’s a limit for an experimentation, as certain things just have to be applied in a specific way otherwise they just won’t work. 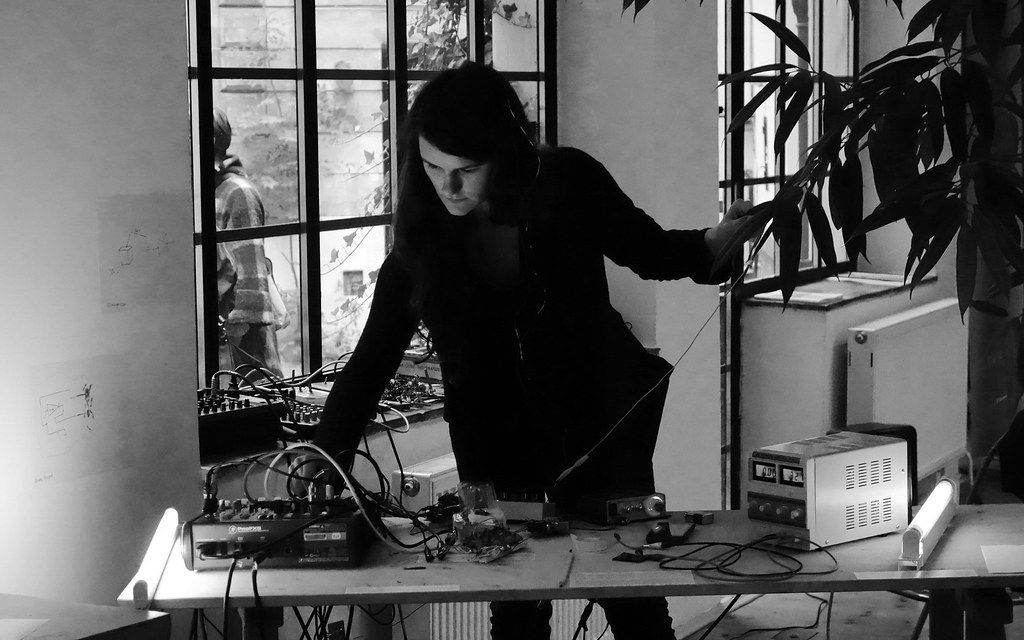 My friend Harry was showing me you’re selling these on Etsy now - how is that going? You get booked for a lot of workshops too right?

Yes, it’s going pretty well! Some months are more intense than others. In December I had so many orders, that it was frankly too much. I was just soldering all the time. That’s not good. I need some life too. But usually it’s about three or four synths a month, which is perfect. But I have new ideas for synths all the time. Some new things are being cooked up right now, actually.

I do workshops too. I have a few coming up in Vienna, Zagreb and Ljubljana in May. I just ran one in Paris; this American school called Parsons New School. New media stuff, very updated, if you know what I mean. So yes, I think people are very interested in learning how to build simple, DIY synths.

It struck me your live shows often have a visual aspect that directly reflect what is happening sonically. For example the two bulbs you use at your shows react to the sound, and I’ve also seen you play with oscilloscopes facing the audience. Is this a conscious decision? Do you see these visual elements as playing a supporting role, or more integral to the show?

Yes, surely it’s a conscious decision. There are a few factors behind that. One, I’m interested in creating multi-sensorial, perhaps psychedelic environments, and second, making invisible things visible. Let me explain it. What I find fascinating about an analog signal is that it’s universal. It’s basically a voltage. And voltage can be applied to everything and can be sent through everything. So basically that’s how, let’s say thermometer works, analog to digital converters and vice versa and the oscilloscopic CRTs , which I used for my show. The same with light, it’s a signal that’s being sent directly to bulbs. There’s not much magic here.

Many years ago I saw Pan Sonic, when they were playing in Warsaw. They had a projection of an oscilloscope and their ‘usual’ noises and rhythms. It was so powerful. I think this synchronicity of different factors even amplifies the intensity of multi-sensorial experiences, which is what I’m looking for. So yes, it’s integral to the show. The other thing is, in electronics, everything is about manipulating the signal flow. You either amplify it or attenuate it. But I just find this signal flow very fascinating and the fact that it can take so many different forms. It’s alive (like flubber)!

Finally what’s next for yourself? Any upcoming shows or projects you are able to talk about?

So, as I mentioned, there’s a live set with Manni Dee coming, at Norbergfestival. Recently I played with Jayson Haebich, a great artist and computer scientist, who does crazy laser shows, so with the combination of my stuff it was quite intense! I think we’re going to play more.

I’m working on the neon bulb synthesiser too (the basic principle is that rather than using chips, I will be using vintage neon bulbs, which work as logic gates, running on 100V). I have an exhibition coming up at Goldsmiths. I’m planning to do this as a multi-channel, multi-light, multi-sensory, (multi-uhh, multi-something) installation. I also want to build some random sequencers with drums built in and acid-ish things. Strange FM radio sequencers… The list is long!