The work of Jan Jelinek has always been about finding beauty in microscopic details. His most frequently referenced work, Loop-Finding-Jazz-Records, was about fragmenting jazz samples into humid microhouse loops, charged with depth and hypnotic appeal. Most recently he released Zwischen, a study on the sounds we make between words: mutters, false starts and intakes of breath. The album was originally produced as a radio play and takes its source material from interviews with a diverse range of subjects. Indeed, it’s not often you find Lady Gaga on the same album as Karlheinz Stockhausen…

The album comes courtesy of Faitiche, a label Jelinek has run since 2008. He first released a series of recordings by the mysterious ‘Ursula Bogner’, often thought to be Jelinek himself working under a pseudonym. Indeed, the label’s title, qualified as: “a combination of facts and fetishes, [that] makes it obvious that the two have a common element of fabrication”, might suggest there is some element of artistic license at play here.

Since then the label has become a conduit for many of Jelinek’s own projects, from his releases as Farben or G.E.S, to his collaborations with Japanese vibraphonist Masayoshi Fujita, or ‘glitchtronica’ outfit Computer Soup. With Zwischen published recently, we caught up with Jelinek to talk house parties with Ricardo Villalobos, forecasting Trump, and the future of Faitiche.

You recently released Zwischen on Faitiche, which was originally produced as a radio play. How does the recorded version differ to the original broadcast? How was it received in radio format?

Well, first of all the radio version is much longer - around 42 minutes. Therefore more interviewees are presented there, with an emphasis on German ‘celebrities’. All the people on the album are included in the radio piece as well, but mostly combined with different, even more abstract synth patches. Working for radio is always coupled with strict deadlines, so I was forced to produce much faster than usual. For the album I took time to rework a few parts. My goal was to create a wider variety of sound and some more harmonic parts as well.

But I’m afraid that Zwischen is still a very abstract sound work. How was the radio piece received? I think quite well. They are going to broadcast it again this year which is an indicator of a positive reception!

Have you ever had any interaction with the subjects and what were the reasons behind your selections? Did you consider what their thoughts would be if they heard the LP when putting it together?

Hmm, no. I don’t think I ever interact with one of the interviewees personally…. A lot of them are already dead. My work with the interview sources was much more abstract: I focused on the voices timbre and their interruptions, not their thoughts. But obviously my choice fell on a few people, whose work is linked to sound poetry, Dada and/or Fluxus, perhaps because I thought that those persons eventually shared the same sense of humour for such work. So, yes - I rather gathered persons of which I could expect an agreement.

There is a potential crossover with William Burroughs’ cut-up tapes. What do you think of his suggestion that language is: “like a virus from outer space”? Your project was more about exposing the beauty in language right?

The ideas of a virus is perhaps too hypothetical, but nevertheless language is a universal and sprawling system, which affects our bodies, thinking and perception. So the virus metaphor captures it well. Zwischen was not really about language though. It was more about articulation, which is independent from language - a universal articulation so to say, which doesn’t transport meaning and is rather experienced as sound. Naturally such rhetorical failures sound mostly disadvantageous but maybe unjustly. If you change the perspective and focus on sound it definitely sounds beautiful as well. 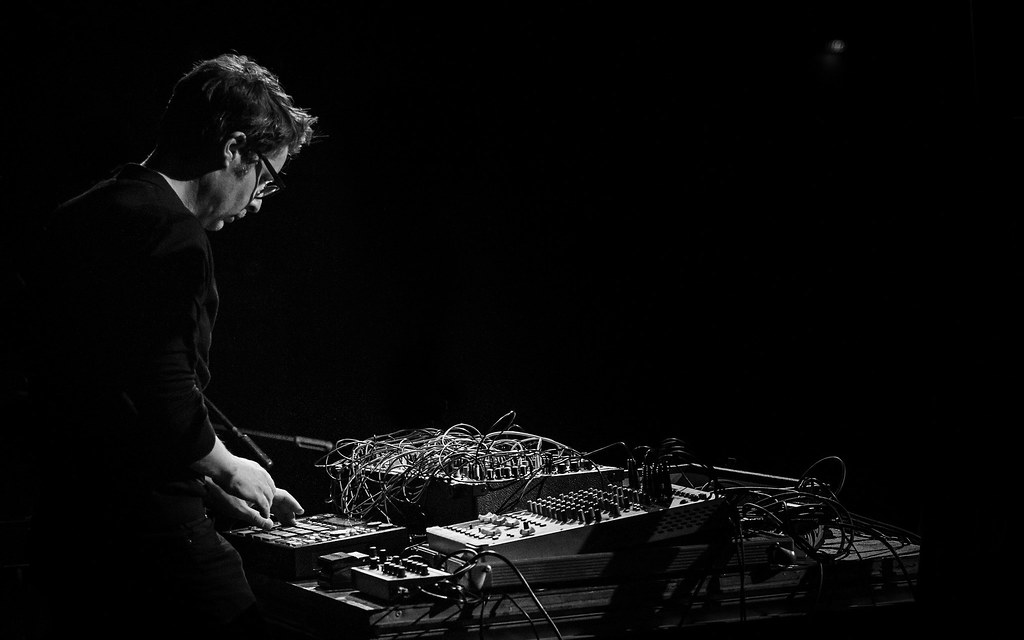 Can you tell me a bit about how Faitiche first started and the meaning behind the title as a crossover of fact and fetish? You have described your production interests as ‘a constant drift’ before - is the same true of Faitiche or are the aims for the label still the same as when you started it?

I’m not sure if I envisioned a particular aim while starting Faitiche. It simply had to work as a platform for my own projects and my friends’ work. You mentioned it already: the word is a neologism, taken from Bruno Latour’s ‘Actor-Network’ theory. It’s based on Latour’s fundamental criticism to social constructivism, in which the subject generates all science and knowledge.

Instead Latour introduces a new perspective. His theory puts the object into spotlight - an object, which isn’t necessarily determined by a subject and is able to evolve its own agency, independent from the subject. To cut it short: object can determine subject. I thought that it is an interesting aspect - especially when you plan to establish a record label. Record labels manufacture objects, which are highly charged with an agency - or at least the music industry pretends that…

But back to your question: no, aims for the label are slowly changing. In fact I want to expand and de-personalise the label’s focus – release music, which isn’t necessarily connected to me anymore. I recently received some very interesting music by some young producers.

I was listening to the PrimeTime EP again the other day - it feels oddly prophetic with those quotes of Trump criticising the Obama administration at the start. How did you come to select the samples for that piece and do you get the same eerie feeling I do listening back to it?

[Laughs] Yes, indeed. But Trump is a phenomena, which always felt very eerie, even back in the days when I founded the label. Recently I saw Woody Allen’s Celebrity again. Trump has a little cameo there - this one is really eerie. PrimeTime was meant as a soundtrack for a video project by Broersen and Lukács called Prime Time Paradise. It was actually recorded and collaged live in my studio. I triggered and processed music samples, with the sounds of news channels randomly fading in and out. I didn’t have control over that, so the Trump sample happened accidentally. He was simply in the spotlight on that day. Now he is in the spotlight every day…

In another interview you mention some of the first house parties you went to were organised by Ricardo Villalobos…What do you remember from those parties and what was it about them that made an impression on you?

Well, I guess this very extreme form of music reception was fascinating me. Non-stop listening for a long term of time to very loud and very functionalised music. Also I remember that Ricardo was very good in hosting people - his top priority was always the party.

I also saw mention you have a teenage son - I wanted to ask, what are his thoughts on your music and work as a live performer? Has he been to a Jan Jelinek show yet?

Yes, I think he saw a performance once - it was an Ursula Bogner tribute show. He is not really into music - even though he has started to fool around with Ableton Live. I have never asked him directly, but I guess my music rather bores him - like all teenagers he is really into Kendrick Lamar. But hey, everyone likes Kendrick Lamar, right?

Finally what’s next for yourself and Faitiche?

It’s hard to believe, but Autumn is tenth label anniversary, so I’m planning an extra vinyl reissue of the first release - Ursula Bogner: Recordings 1969-1988. For spring next year, my collaboration with Japanese drone musician Asuna is going to be released. Besides that I’m hoping to release an album by two young producers from Canada - but it is still in process, so please understand, that I can’t tell you more right now…