Sticky Mike’s Frog Bar is named after a famous Manhattan basement venue. Incidentally, it also has quite a sticky floor, alongside some pretty low ceiling beams which have probably been the cause of an aching head more often than the alcohol. Whilst all this may be true, it isn’t enough to stop the seaside venue from occupying a special place in my heart, namely due to all the weird and wonderful shit they are willing to play host to. Either under the current title or former guise as ‘The Jam’, we’ve seen the basement bar occupied by Japanese psychedelic groups, footwork DJs (accompanied by those crazy-legged dancers) and some of the more adventurous strands of the dubstep scene a few years back.

The award for the most avante-garde event I’ve seen at the venue however should arguably go to Cutting Room & Voyder’s recent event, bringing the now Berlin residing Dead Fader back to his previous home city, alongside K (no o), Nolan Dialta, and err… Shitwife.

Listening through Cutting Room Records’ discography or weekly radio shows it quickly becomes clear their approach to electronic music is pretty unique - noise, drone and techno influences are crossed with the wild flair of punk and metal. Stepping into the darkened basement of SMFB it didn’t take long to realise this vibe would be carried into the evening - looking past the silhouetted figures, Nolan Dialta could be seen inclined over various machines, conjuring up vapourous atmospheres and grating drones to introduce the evening. 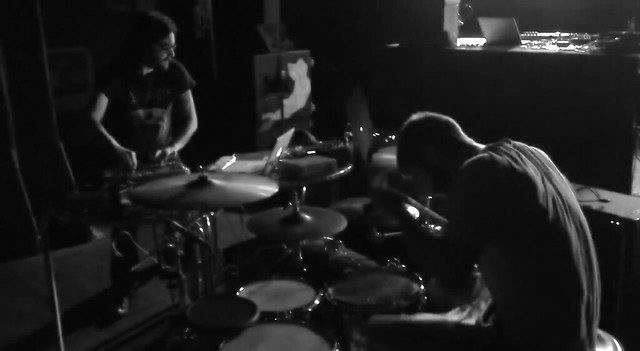 K (no o)’s violent amalgamation of noise & techno followed, the Brighton based producer giving little build up, instead pelting a medley of distorted, off-kilter drums and wildly oscillating bass in the face of the audience. The impact of this was incredibly physical - testament to the force of K (no o)’s warped production as much to the surprising weight of the venue’s sound system.

Where intensity is concerned however, you’d be hard pressed to deny the presence held by London based duo Shitwife. “This next one is our take on gabber” they announced at one point before launching into a barrage of breakneck drums and raw, discordant synth work. More than anything else, Shitwife are a great deal of fun to watch live, and it’s hard not to raise a smile at the level of energy they bring even if the performance might leave your ears ringing.

Following this headliner and Robot Elephant signee John Cohen took to the stage under his Dead Fader guise, presenting a live interpretation of material from his recent albums Scorched and Blood Forest, again with a contagious level of energy. Music with such strong dynamics and fluidity is well suited to the live format, filling every inch of space with snarling low-end and spaced out melodies.

The whole experience essentially reminded me how much I miss going to gigs and not knowing quite what to expect; feeling scared or out of depth, experiencing sounds which are alien and exciting. This spirit felt very much alive throughout the gig - here’s to hoping there are a few more on the horizon.